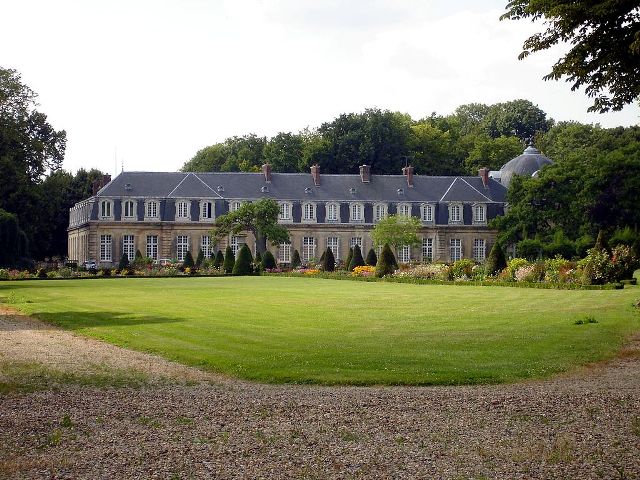 Location: Arnouville, in the Val-d'Oise departement of France (Ile-de-France Region).
Built: 18th century.
Condition: In good condition.
Ownership / Access: Owned by an association.
ISMH Reference Number: PA95000006
Notes: Château d'Arnouville is a French castle in the town of Arnouville in the Val-d'Oise department and Île-de-France. Built between 1751 and 1757 by Pierre Contant d'Ivry and Jean-Michel Chevotet on behalf of Jean-Baptiste Machault of Arnouville, minister of Louis XV, it remained unfinished. The main building was to be a large body of U-plane perpendicular to the slope with wings. The long east wing, facing the arrival, one has been built. It consists of an upper ground floor and a floor attic and has 18 windows and facade skylights. The front, at right angles, was not completed and remained small square adjoining the pavilion remains on the back. The foundations are a long terrace extension, overlooking the lawns and the canal. The chapel is located at the end of the east wing and is the most remarkable element of the construction. She recalled that Abbey Penthemont in Paris, another work of Contant d'Ivry. Like this one, it is covered with a dome Saracen vault, also called "the roussillonne" brick and plaster resting directly on the wall, a technique introduced by Contant north of the Loire, and pierced with four skylights. Brunetti son had painted a trompe l'oeil architecture disappeared. The orangery "decorated with a Doric" with a pond in front is indicated by Dezallier Argenville. It contains a beautiful fireplace Louis XV style. The entrance gate was carried out in the nineteenth century to replace the one that the Baroness de Rothschild was removed and is now at the abbey of Vaux-de-Cernay. The stables, which were majestic, were destroyed. Facades, roofs of the castle and the orangery, the entire chapel, the main staircase with its cage, the two fairs paneling on the ground floor and the footprint of the park is the be recorded as historical monuments since October 17, 2000.