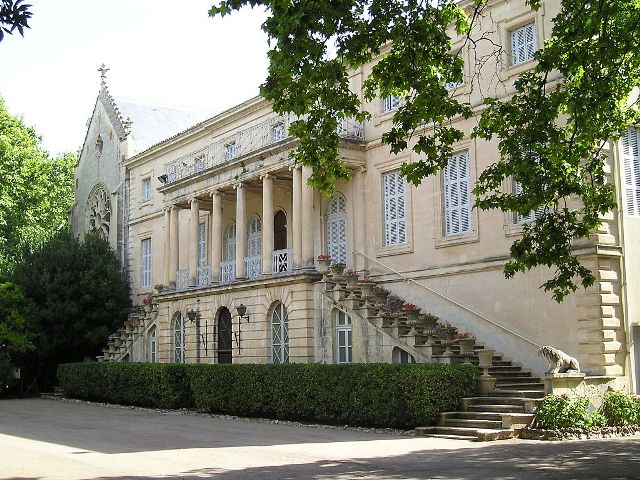 Location: Montpellier, in the Hérault departement of France (Languedoc-Roussillon Region).
Built: Rebuilt between 1895 and 1897.
Condition: In good condition.
Ownership / Access: --
Notes: Domaine de Grammont was originally the seat of a priory under the Grandmontines. It is then converted into a vineyard in eastern Montpellier, become since 1980 a space dedicated to entertainment and sports. In 1174, the Grandmontains settle on a dependent field of the cathedral chapter of Maguelone. The chapel was built around 1180 (along with all the monastic buildings), the bed was remade in 1225. During the wars of religion (sixteenth century), the priory was partially ruined. In 1701, it is given at the seminary in Montpellier. Sold as national property in 1790, the west wing was rebuilt in the early nineteenth century. The chapel was rebuilt between 1895 and 1897 on the site of the previous by architect Pierre Arribat with sculptures by Auguste Baussan and stained glass of Louis-Charles-Marie Champigneulle. The castle centrally in the park saw its preserved and maintained gardens. It serves as a town hall annex for ceremonies civil marriages, the area of ​​the parking lot is more easily accessible than the city center, where the town hall is located. Facing the Saint-Lazare cemetery expansion difficulties located northeast of pericentre Montpellier, was built the cemetery Saint-Etienne and built a funerary complex to the east of the field.

How To Get To Domaine de Grammont (Map):