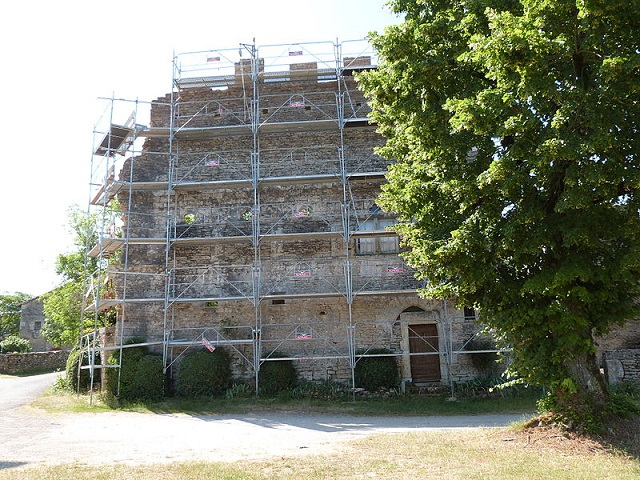 Location: Aujols, in the Meurthe-et-Moselle departement of France (Lorraine Region).
Built: 13th century.
Condition: --.
Ownership / Access: --.
Notes: The castle of Aujols known as Les Créneaux is the vestige of a castle located in Aujols, France.Tradition has it that this castle was built by the Knights Templar. This tradition is contradicted by the fact that the seigneury of Aujols belonged to the chapter of the cathedral of Cahors in the first half of the thirteenth century. The chapter has subordinated the seigneury to the family of Cardaillac-Bioule in spite of the rights claimed by the descendants of the former Viscounts of Cahors. However, we note that the church of Aujols had an architectural party close to that of the Commandery of La Capelle-Livron. Moreover, the knights of Vayrols who had yielded to the Templars several houses in Cahors around 1194 owned land at Aujols at the end of the twelfth century. It is possible that the chapter of Cahors had just acquired the church and the fief to establish a priory built near the church of St. John the Baptist. The first mention of this fief held by the Cardaillac-Bioule dates from 1252 when Bertrand de Cardaillac-Bioule pays tribute to the chapter of Cahors for various seigneuries of which Aujols. His descendants, Bertrand II and Hugues paid homage to this fief in the chapter of Cahors in 1316 and 1339. The castle of Aujols was built in the second half of the thirteenth century, therefore by the family of Cardaillac-Bioule, probably in a joint enclosure with the church as seems to indicate an act dated 1310 which specifies that the parishioners must Cross the castle to go to mass.The Cahors chapter seems to have lost its suzerainty over the fief because the Cardaillac-Bioule paid tribute to the king for their fiefs, Aujols, Cieurac and Saint-Cirq-Lapopie, after the Hundred Years War. Like many fiefs of the Quercy, Aujols emerges from the Hundred Years War completely devastated. Jean de Cardaillac (after 1408-after 1470), coseigneur d'Aujols had to make land of the seigniory to establish new inhabitants in 1455. His son, Raymond de Cardaillac (ca. 1450-1501) had participated in the league Well with other lords of Guyenne. In 1487, by order of Anne de Beaujeu, the armies of King Charles VIII devastated his lands and destroyed the castle of Cardaillac in Saint-Cirq-Lapopie and may have passed by Aujols. He began the construction of the castle of Cieurac. In 1503, Jacques de Cardaillac (1476-c. 1515), seneschal of Quercy, coseigneur of Saint-Cirq-Lapopie, lord of Cieurac, Bias and Concots, pays homage to Aujols in 1503. From 1520, the Cardaillacs sold Part of Aujols to the Dayrac family. His son, Antoine de Cardaillac, pays homage to Aujols in 1543 in the chapter of Cahors. Antoine II de Cardaillac made an agreement with the inhabitants of Aujols about the aréages of the rent in 1598. The widow of the latter, Antoinette de Paluels, sells to the consuls rents on the parishes of Aujols and Laburgade. The castle of Aujols was left inheritance by Bertrand II of Cardaillac-Bioule to his widow. The Cardaillac-Bioule lost the lordship of Aujols at the end of the sixteenth century and the castle of Aujols is then abandoned. Antoine de Fontanges, lord of Laroque-des-Arcs, sells half of the seigniory in 1631 and the castle to Mademoiselle de Vanis. This part then passed to the Dadines of Hauteserre. The castle is in ruins in the eighteenth century. A new dwelling will be set up there by keeping two facades of the castle. The building is listed under historic monuments on 25 June 1929.