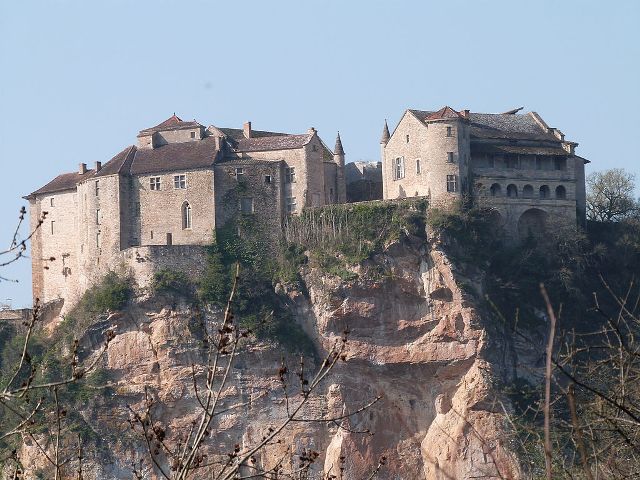 Location: Bruniquel, in the Tarn-et-Garonne departement of France (Midi-Pyrenees Region).
Built: 12th-19th century.
Condition: Partially ruined.
Ownership / Access: Privately owned.
Notes: Château de Bruniquel are two French castles located in the town of Bruniquel (Tarn-et-Garonne region Languedoc-Roussillon-Midi-Pyrénées). Legend has it that this is the Merovingian Queen Brunhilda who built the first castle ( "Castle old" or "Biel castle") in the sixth century on the site of a Roman castrum (fortified camp). Originally a castle Bruniquel was destined to watch over the valley road connecting the Quercy to the Albigeois. A village was formed around him and became a prosperous city whose notable mansions testify. Viscount Bruniquel becomes about 1050. The castrum was conquered in 1176 by the counts of Toulouse on Trencavel. On the ruins of the first castle was built the current "old castle" in the thirteenth century. It was the property of the counts of Toulouse. It is inhabited by the Viscounts of Bruniquel. After the construction of the castle, a second was high on the cliff, by Maffre of Comminges- Cousserans, giving the whole name "Castles Bruniquel". Indeed, in the middle of the fifteenth century, Antoine Vicomte de Comminges County Comminges, quarreling with his son Leonard, sells a part of the domain to a cousin Maffre From Comminges- Cousserans that will build his own castle from 1485 to 1510 the "young Castle" or "castle Djoubé". For three centuries, the two branches are not going to stop quarreling. The owners of the old castle being Catholics and those of the Castle "young" Protestants. "Old Castle" still bears the scars of the attacks, including the Knights' Hall. It was not until the late eighteenth century that the viscount of the "old castle" (or "Biel castle"), Louis Rigal Worker buys the "castle young." Castles of Bruniquel are the subject of a classification as historical monuments by the list of 1840. At the same time, a tax levied on the openings will encourage the viscount to wall windows and doors of his new acquisition. Only the old castle continue to be permanently inhabited until 1950, then as a second home until 1980, year of the death of the last of Bruniquel Viscountess, Lady Bellefont. For two centuries, the young Castle will be abandoned and will be paradoxically the most damaged part of the castle when the municipality will acquire at auction for $ 660,000 FRCS in 1987. Since the municipality keeps the restore. The castles are open for business early March to mid-November; off season, Sundays and holidays. The "young Castle" includes a room evoking prehistory with the "treasures of Bruniquel" found in several caves near the castle.