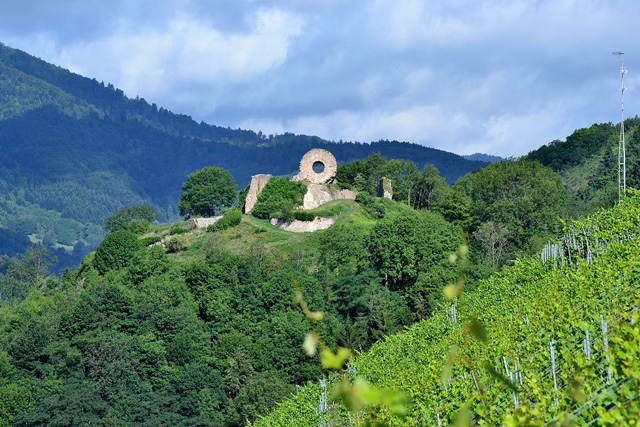 Location: Thann, in the Haut-Rhin departement of France (Alsace Region).
Built: 14th-15th century.
Condition: Ruins.
Ownership / Access: Owned by the town.
ISMH Reference Number: PA00085695
Notes: Chateau d'Engelbourg (colloquially known as "the Eye of the Witch" by the locals) is a historical monument located in Thann, in the French department of Haut-Rhin. Following the Treaty of Westphalia attached Alsace to France, the border is pushed des Vosges on the Rhine and the castle lost its strategic interest. Louis XIV then ordered, in February 1673, the dismantling of the castle of Engelbourg. The work was entrusted to the steward Mathias Poncet River, which is run by the miners of Giromagny. After several attempts, the great tower of the keep rises and breaks into several parts; one of them fell back to form what has been nicknamed "the Eye of the Witch." The spectacular ruins were represented in several romantic nineteenth engravings. The remains of the building are classified as historical monuments since 18981. Since 2006, every year young volunteers come to restore the castle ruins through the Building Research Association and Grand East. From 2006-2012, sections of walls and walls, whose defensive unit against the artillery, have been updated and consolidated. A very detailed survey was conducted on the occasion, and allowed a computerized 3D reconstruction of the site.