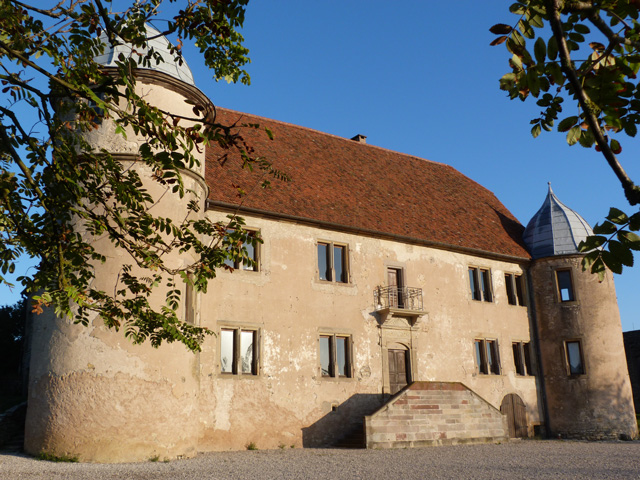 Location: Diedendorf, in the Bas-Rhin departement of France (Alsace Region).
Built: c.1570.
Condition: Intact.
Ownership / Access: Owned by a private person.
ISMH Reference Number: PA00084691
Notes: Castle Diedendorf is located in the town of Diedendorf in the Bas-Rhin. It is the subject of a registration as a historic monument since 1977. In a letter of nomination dated February 12, 1570, Count John IV of Nassau-Saarbrucken gives a fief to John Streiff of Lauenstein, then bailiff of Count Sarrewerden, a farm and land Diedendorf. It was in this village that John Streiff built shortly after his castle. The latter was completed around 1580. He also built the church of Diedendorf in 1588. He died in 1595 and his union with Maria Eich, he had a daughter and six sons. His daughter Elisabeth married Mathias Steyss of Gornitz, lord of Lorentzen. The castle remained in the descendants of the family Streiff von Lauenstein until 1730, when the Münchhausen sold it to William Augute Luder. The latter's son, Charles Frederick, Grand Bailiff of Nassau County-Sarrewerden ceded the fief and the castle in 1743 to his lord Guillaume-Henri Prince of Nassau-Saarbrücken. From that moment the castle is entering a period of instability for nearly a century when he changed twelve times owner. In 1862 it passes into the hands of a wealthy cleric Simon Striffler major landowner notary. His descendants retain more than a century and was sold in 1966 to husband-Clark Schlumberger. This is Mrs. Clark who sold it in 1977 to Jean-Daniel Ludmann, then curator of the Palais Rohan in Strasbourg.The castle park Diedendorf enrolled in pre-inventory remarquables gardens. Within the enclosure is also an orchard.