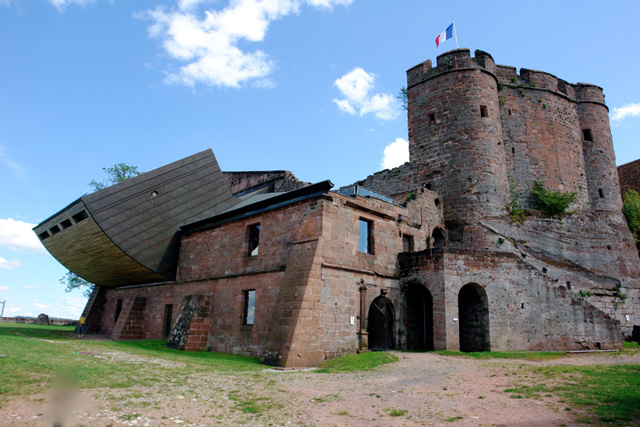 Location: Lichtenberg, in the Bas-Rhin departement of France (Alsace Region).
Built: 13th century.
Condition: Ruins.
Ownership / Access: Commune of Lichtenberg.
Opening Times: Check their website for more info.
Price of Admission: Check their website for more info.
Notes: The Chateau de Lichtenberg is a castle built on a singular prominence in the northern Vosges at the end of the village of Lichtenberg, Bas-Rhin department in Alsace in north-eastern France. The castle was first mentioned in 1206 and is most well-known as the home of the Counts of Hanau-Lichtenberg. It was left in ruins in 1870 after bombardment by Württemberg troops during the Franco-Prussian War, but was restored in the 1990s and is open to the public. The castle is first mentioned in 1206, as home to the Lords of Lichtenberg. The Lichtenberg line passed to the Hanau family, who became the Counts of Hanau-Lichtenberg. In the late 16th century, Phillip IV of Hanau-Lichtenberg hired Daniel Specklin, who had designed the fortifications of Strasbourg, to turn the castle into a fortress to use and protect against a new weapon: the cannon. In 1678, the chateau capitulated to French troops after an eight-day siege. The château, like most of the Alsace region, came under the control of the kingdom of France. On 7-9 August 1870, during the course of the Franco-Prussian War, the Château de Lichtenberg was bombarded by artillery of Württemberg troops. A large fire broke out on the evening of 9 August, which destroyed much of the château and forced its capitulation. In May 1871, the surrounding region was transferred to newly-formed German Empire. The chateau became a French national historic site—monument historique—on 1 May 1878, although it remained within German territory until the end of World War I, when it was returned to France. The chateau is owned by the commune of Lichtenberg and is run by the Pays de la Petite-Pierre community of communes.

How To Get To Chateau de Lichtenberg (Map):