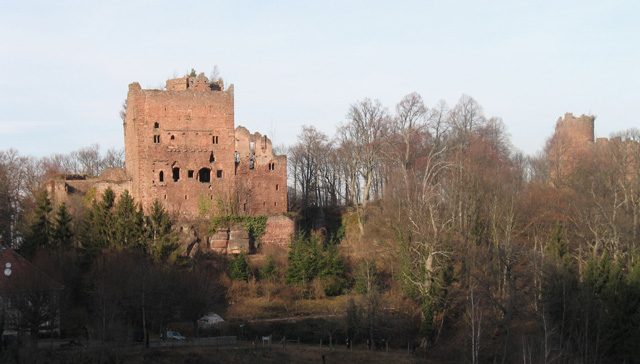 The Châteaux d'Ottrott, Rathsamshausen on the left and Lutzelbourg in the background Photo - Francois Schnell from Strasbourg, France - Wikipedia - lic. under CC BY 2.0 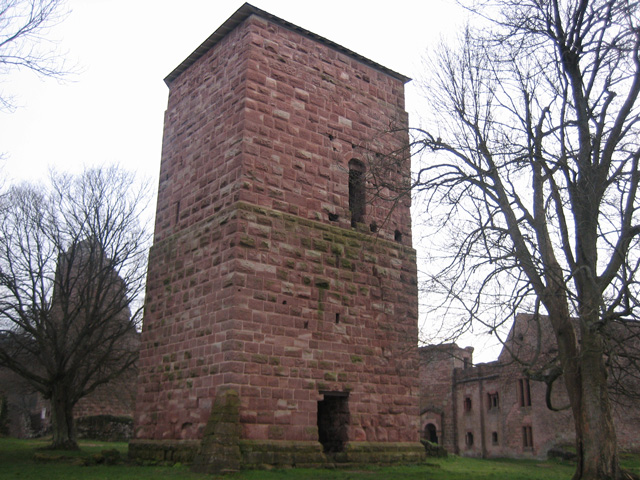 Overview of the Castle of Lutzelbourg - Richieman - Own work - Wikipedia - lic. under Public Domain

Location: Ottrott, in the Bas-Rhin departement of France (Alsace Region).
Built: 1076, 1196, 1220, 1530.
Condition: Ruins.
Ownership / Access: Private property.
ISMH Reference Number: PA00084882
Notes: The Chateau de Lutzelbourg is a medieval castle ruin, above the town of Ottrott, in the Bas-Rhin department of eastern France (Alsace). The castles of Ottrott were built on the plateau of Elsberg about 500 metres in height. Two ruins, separated hardly from about fifty metres, raise themselves nowadays in this place: the "Rathsamhausen" on the West of the site and the "Lutzelbourg" in the East. Recent searches allowed to unearth the bases of a primitive castle situated between the current ruins of both castles. This primitive castle, named Old Lutzelbourg, was built very certainly by 1076 on the initiative of the counts of Eguisheim solicitors of Hohenbourg's monastery (Sainte-Odile) located some kilometres from there. This first mansion will be destroyed by the Hohenstaufen at the beginning of the 12th century but will immediately raised again by them to be finally enfeoffed to Conrad de Lutzelbourg in 1196. In 1198, it was then arsoned by the party of the Eguisheim-Dabo. The construction of the new castle, which will be called in the middle of the 16th century "Rathsamhausen", begins by the beginning of the 13th under Otto of Burgundy firmly decided to take back the hand on the region. The works had to end after 1220, the Lutzelbourg being always present on the scene because in 1230 Elisabeth de Lutzelbourg is appointed abbess of the monastery of Hohenbourg. By the middle of the 13th century the castle presently called "Lutzelbourg" is built just under the nose of" Rathsamhausen" . During the visit of the site, we notice that the defences of "Lutzelbourg" are turned towards its neighbour, always in the hands of the Hohenstaufen. The historians suppose that it was built on the initiative of the bishop of Strasbourg, Henri de Stahleck, to gain control on the imperial possessions. During the works, the defenders of "Rathsamhausen" do not stay crossed arms and build an impressive keep turned too towards its neighbour. We guess the atmosphere, far from being cordial, who had to prevail on the construction site! By the end of the 13th century, the Hohenstaufen has already lost all their influence on the empire and some kind of agreement was probably found between Rudolph of Habsburg and the episcopal party. In 1392, "Lutzelbourg" is enfeoffed to the counts of Andlau who shall retrocede their rights next year to the Rathsamhausen-Ehenweier already in ownership of the nearby castle. They shall undertake to reconstruct both mansions at the beginning of the 15th century. "Lutzelbourg" will again be destroyed between 1470 and 1570, probably in 1525 during the War of the Boorish, whereas "Rathsamhausen" will successively be enfeoffed in 1424 to Henri de Hohenstein then to his son-in-law, Daniel de Mullenheim. Important Renaissance looking style renovation works are begun by the Mullenheim between 1520 and 1530. Conrad de Rathsamhausen finally buys back the castle by 1557 to Caspar de Mullenheim. It will definitively wear from then its name of "Rathsamhausen" which we know it even today. Without that it is a certainty, the castle will be plundered and ruined during the Thirty Years' War. The castles of Ottrott are nowadays private property. They have been listed as Monuments historiques since 1985.