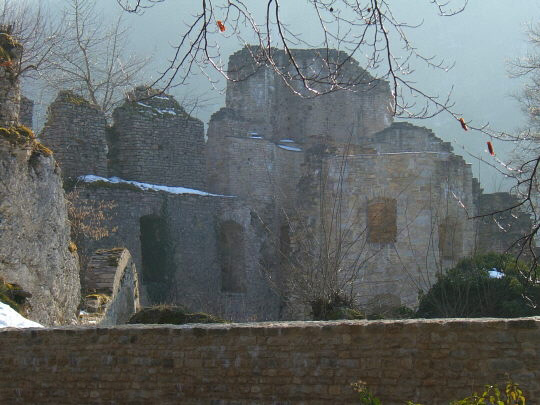 Location: Oberlarg, in the Haut-Rhin departement of France (Alsace Region).
Built: Extant 1271.
Condition: Ruins.
Ownership / Access: Owned by a private person.
ISMH Reference Number: PA00085570
Notes: The Chateau de Morimont (German: Moersberg) is a ruined castle in the Alsace region of France, situated in the commune of Oberlarg in the Haut-Rhin département. It is 40 km south-west of Mulhouse and 45 km west of the Swiss city Basel.The first documented mention of the castle is from 1271 when the count of Ferrette made an oblation to the bishop of Basel. It was occupied by, and takes its name from, the Morimont family, vassals of the Ferrettes and later the Habsburgs. A war with Basel and the Swiss led to the destruction of the castle some time between 1445 and 1468. It was rebuilt by the Morimonts in the 15th and 16th centuries with seven artillery towers. In 1582 they sold it to the counts of Ortenbourg Salamanque who kept it until the Thirty Years' War during which it was destroyed by French troops in 1637. In 1641, Louis XIV gave it and the manor to the Vignacourts, who stayed until the French Revolution. It subsequently belonged to Jean Bruat, Aaron Meyer and, from 1870, the Viellard family.Built on a rocky east-west crest, the castle dominates the route between Oberlag and Levoncourt. It is constructed from Jurassic limestone with a lime mortar. The northern building, measuring 51 by 7.5 m (~170 by 25 ft) has an underground semi-circular vaulted cellar running the full length and the remains of two spiral staircases. The southern building consists of a polygonal staircase tower as well as remains of pointed-arch vaulting and a fireplace. The tower in the north west corner has oven-shaped vaulting. The southern artillery tower has three vaulted casemates: its cannon openings are set to fire horizontally, with one covering the entrance. The north east tower, built in 1515 has been restored and the present entrance to the cellar through the curtain wall is not original. The oldest part of the present castle — a U-shaped tower in the southern corner — dates from the 13th or 14th century. Referred to by most authors as a keep, it was built onto the bare rock and provided the first residential quarters. The south west Schlossturm Tower dates from the 15th century as do part of the west curtain wall and the south curtain wall. In the north, the great hall of 1552, on the probable site of the former lower courtyard, is flanked by two large artillery towers; the north east tower dated 1515 carries the arms of Hans Jacob de Morimont and his wife Margarete de Furtenberg. In the south, there was a second residence of which a staircase tower remains. The castle entrance was defended by a low casemated tower and a barbican. In the middle of the west wall is a tower with wells. The adaptation of the castle to artillery warfare was modern in conception but with little military value, the site being dominated from three sides by high ground. Its Renaissance form is particularly early for Alsace and is explained by the Morimonts' close links to France. The castle was used as a quarry until its restoration by Quiquerez starting in 1864. A 1361 document refers to a lower castle ("Bas Morimont") and a higher castle ("Haut Morimont"). The former is located at the present Morimont farm to the west. Very little remains; dated to perhaps the 12th or 13th century, it was destroyed by the 15th century at the latest and is not mentioned after 1423 The Château de Morimont and the neighbouring smaller castle ruins are listed, since 1841, by the French Ministry of Culture as historical monuments (monument historique).

How To Get To Chateau de Morimont (Map):