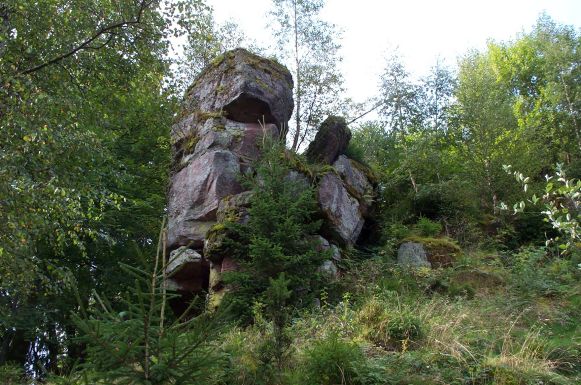 Location: La Broque, in the Bas-Rhin departement of France (Alsace Region).
Built: 1205-1400.
Condition: Ruins.
Ownership / Access: State property.
ISMH Reference Number: PA00084659
Notes: Chateau de Salm is a ruined castle overlooking the valley of the Bruche, located in the commune of La Broque in the present-day département of Bas-Rhin, Alsace, France. Construction began in 1205 and was completed around 1400. It has been listed since 6 December 1898 as a monument historique by the French Ministry of Culture. The Chateau de Salm was built between 1205 and 1225 by Henry III, Count of Salm (of Haute Lorraine), on the territory of the Senones Abbey of which he was the lawyer. The Salm dynasty originated in the 13th century with the Counts of Bar (Bar-le-Duc), one of the more powerful families of Lorraine. The Salm-Lorraine dynasty came from the Luxembourg family. Henry IV, grandson of the builder, reorganized the saltpans of Morhange as well as the Framont forges which were situated close by. Industrial politics provoked a military reaction around 1259 from the Bishop of Metz, who occupied the installations and forced the count to sell him the castle at Salm and the Château de Pierre-Percee and to swear fealty to him. When the bishop left the castles, the count retook the fortresses. In 1285, the trouvere from Lorraine, Jacques Bretel, spent several days at the castle where he met Count Henry IV. He recounted his stay in his work le Tournoi de Chauvency. The area was the site of an important occupation throughout the 14th and 15th centuries (with foundry, metallurgy and pottery activities), without a doubt the after-effects of the acquisition by Jean de Salm of the lower valley of Bruche in 1366, from Mutzig to Schirmeck. The large works completed around 1400 considerably altered the castle's defences with the construction of a thick shielding tower, a barbican and a new gate. The old shield wall was torn down and adapted for new functional requirements. The castle seems, however, to have been ruined around 1500 because it is recorded as a ruin in 1564, though no documentary record of violent destruction is known. Prince Constantin Alexander of Salm-Salm visited the castle in 1779 in the company of the prince of Hohenlohe-Schillingsfurst, to see an inscription on the bas-relief of an outside wall. The ruins served as a quarry soon after the annexation of the Principality of Salm-Salm by the French Republic in 1793. It was bombarded by French artillery during the First World War in 1914 because a German observation post had been established there. Integrated into German territory by the Treaty of Frankfort in 1871, the vestiges of it were classified as a historic monument by the Imperial Administration of Alsace-Lorraine on 6 December. In 1919, the territory was attached to the French département of Bas-Rhin.The princely visit of 1779 was preceded by important repair works which weighed heavily on the face of the ruins. Even today, the plan and chronology of the castle's construction is still open to interpretation, the assembly of data and analysis of gothic elements place this castle among the most beautiful counts' achievements of the 13th century in Alsace and Lorraine.

How To Get To Chateau de Salm (Map):