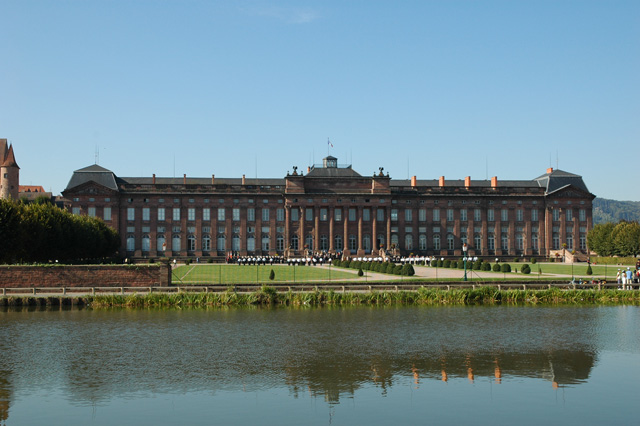 Location: Saverne, in the Bas-Rhin departement of France (Alsace Region).
Built: 1780 on site of 1670.
Condition: Restored.
Ownership / Access: --
Notes: The castle Rohan is a former episcopal castle built in the late eighteenth century by the architect Nicolas Salins de Montfort. It is in the center of the town of Saverne, Bas-Rhin and houses the municipal museums. It is the subject of multiple classification as historical monuments: in February 1933, November 1934 and November 1995. The castle was originally a medieval castle that was transformed into a residence by Robert de Cotte in the eighteenth century, residence destroyed by fire in 1779. So, the owner of the Cardinal Cardinal de Rohan castle decided to build a palace more sumptuous than the old. But the Cardinal de Rohan could not enjoy this palace, being driven in the affair of the necklace, which forced him to end his life in exile. The architect Nicolas-Alexandre Salins could not finish the palace when the French Revolution broke out. Abandoned until the Second Empire, the castle had its preservation to Napoleon III, who made the completion to house the widows of officers killed in the line of duty. In 1871 the castle was transformed into a German barracks and French in 1918. In 1952, the building became a cultural municipal institution.

How To Get To Chateau de Saverne/Rohan Castle (Map):