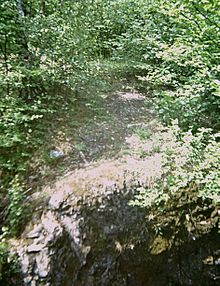 Location: Mitzach, in the Haut-Rhin departement of France (Alsace Region).
Built: 13th century.
Condition: --.
Ownership / Access: --.
Notes: The castle of Stoerenbourg is in the French commune of Mitzach, in the department of Haut-Rhin.Castle fort cité ds 1395. It is built by the abbey of Murbach to watch the passage of the pass of Bussang. Until 1576, the castle was called "Waldstein". He then takes the name of a devoted family of the abbey, the Stoer of Stoerenbourg. These will become one of the most powerful families of high Alsace. The castle then passes into the hands of the Waldner of Freundstein. It was razed in 1637 during the Thirty Years War. According to a local legend, the lord of the fortress was very wicked. He obliged the peasants to give him their milk, which entered into the constitution of the mortar used for masons.There are very few vestiges of the castle: a low wall at the end of the five-meter deep fault and dug by men to separate the rock in two parts, as well as scree covered by vegetation.