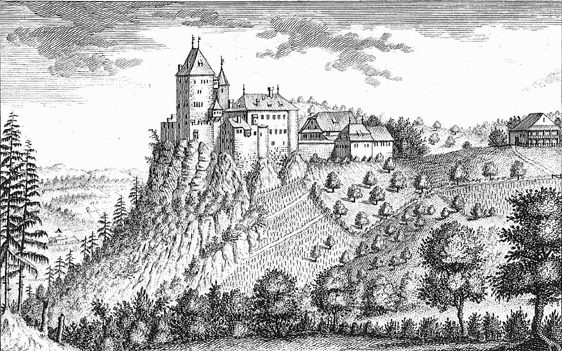 Location: Kruth, in the Haut-Rhin departement of France (Alsace Region).
Built: 18th Century.
Condition: Ruins.
Ownership / Access: --
Notes: Wildenstein Castle, known in German Schloss Wildenstein, is a castle located on the territory of the town of Bubendorf Basel, Switzerland.The castle is built in the eighteenth century atop a rocky outcrop by Heinrich von Eptingen who took the name of "Wildenstein" in 1293. Under the reign of his son Gottfrid, the building was stormed in 1334 by troops Bernese and soleuroises following an attack near Thun Bernese subjects by troops of Wildenstein1. The son of Gottfried, Henmann, sold the castle in 1380 to a family of Baden. It then passed through several hands in the following years, successive owners (including the city of Basel for some years) are making many changes and expansions. Classified as Nationale2 importance of cultural property, the castle was finally bought by the canton in 1995 and became the scene of cultural events. In 2012, a referendum confirms that the castle should remain a possession of the canton.

How To Get To Chateau de Wildenstein (Map):