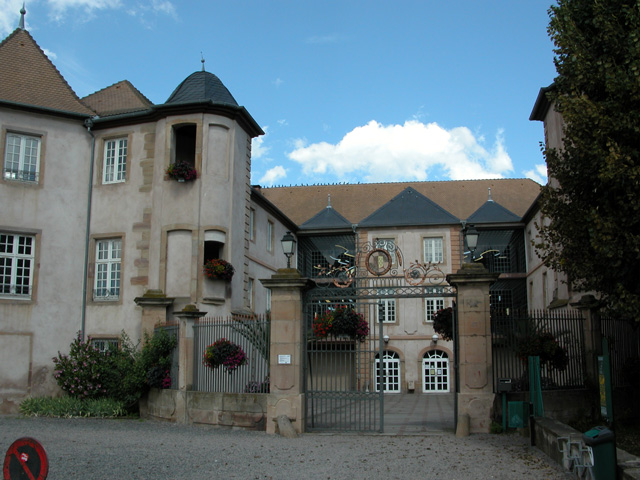 Location: Mutzig, in the Bas-Rhin departement of France (Alsace Region).
Built: 1673 on site of 1274.
Condition: Restored.
Ownership / Access: Now houses a cinema and a library.
ISMH Reference Number: PA00084953
Notes: The Chateau des Rohan ("Castle of the Rohan") is a former castle and weapons factory now serving as a museum and cultural centre in the French town of Mutzig, Bas-Rhin, Alsace. The castle, whose structure goes back to the 13th century, belonged to several families of noblemen and bishops of Strasbourg before being turned into a rifle factory after the French Revolution. The castle is most famously associated with the House of Rohan and the Chassepot rifle. Mutzig's castle's history goes back to the fortification of the town in 1274 by Rudolph of Habsburg. The medieval castle, a Wasserburg (i.e. surrounded by a moat derived from a canal) was heavily destroyed by the Swedes in 1632, during the Thirty Years' War, after having already been assaulted by Ernst von Mansfeld's troops in 1622. The city's and castle's masters, during these times marked by frequent battles and rivalries between feudal families, were alternatively and sometimes simultaneously the bishops of Strasbourg and the House of Zweibrucken. The castle as it now appears is a Baroque structure. It was inaugurated in its present shape in 1673 to serve as the residence of the bishop of Strasbourg, Franz Egon of Fürstenberg. Furstenberg was succeeded by his brother Wilhelm Egon. After the family of Rohan took over the bishopric of Strasbourg, the castle served as a residence to the dukes Armand Gaston, François-Armand, Louis Constantin and Louis René Édouard de Rohan, between 1704 and 1790. However, after the completion of the Palais Rohan of Strasbourg in 1742, the chateau, which had already been rivalled by the residences in Saverne, became only of secondary importance to the family. Mutzig's castle was disowned and pillaged during the French Revolution. In 1799, it was bought by the arms manufacturers, brothers Coulaux of Klingenthal, Bas-Rhin, who, on 20. April 1801, opened their weapons factory in its walls. The factory ran until the outbreak of the Franco-Prussian War in 1870. It is there, in the Manufacture d'Armes de Mutzig (also known as Manufacture impériale de Mutzig) that the native of Mutzig, Antoine Alphonse Chassepot fabricated some of his famous rifles, one of the most advanced fireweapons of its time. The castle was fortified again by the Germans in 1893. Today, the castle houses a cinema and a library as well as, since 1996, the municipal museum Musee regional d'armes (previously, since 1977, the Musée des Rohan) displaying a vast collection of historic rifles. The castle is listed as a Monument historique since 1976 by the French Ministry of Culture.

How To Get To Chateau des Rohan (Map):