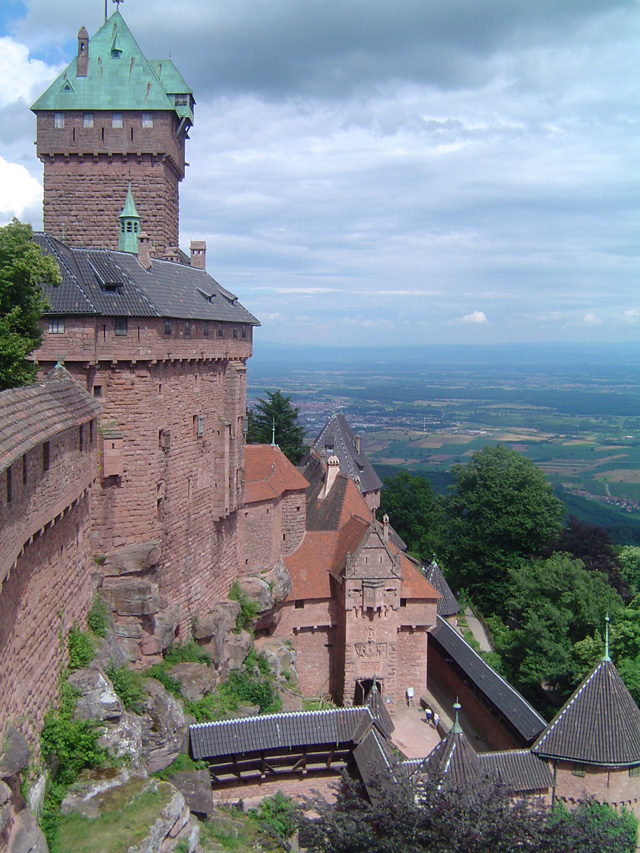 View from the castle over the Alsatian plain up to the Black Forest Photo - I, Darkan777 - Wikipedia - lic. under CC BY-SA 3.0 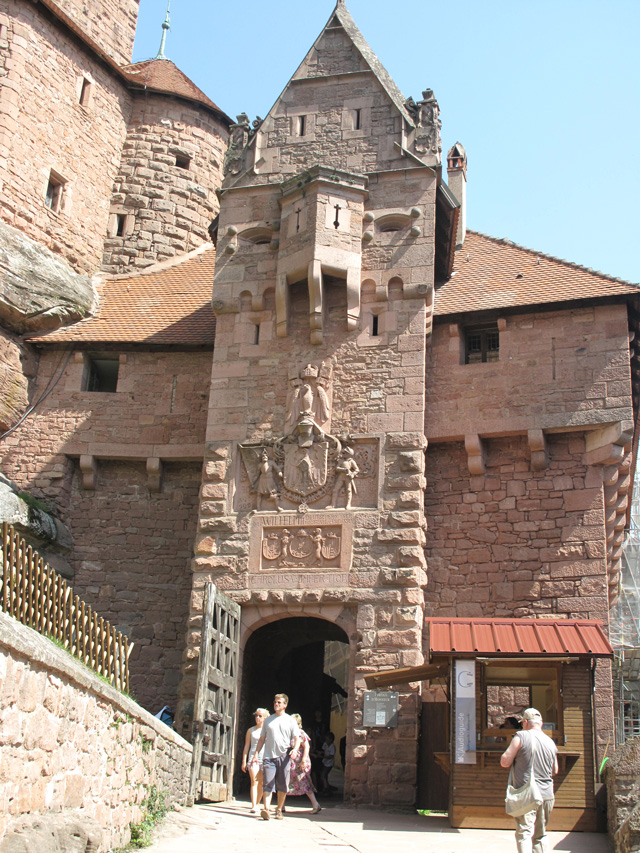 Location: Orschwiller, in the Bas-Rhin departement of France (Alsace Region).
Built: 1114, possibly earlier site to 774.
Condition: Reconstructed.
Ownership / Access: Owned by the town.
ISMH Reference Number: PA00085298
Notes: The chateau du Haut-Kœnigsbourg (German: Hohkonigsburg) is a medieval castle located at Orschwiller, Alsace, France, in the Vosges mountains just west of Sélestat. It is situated in a strategic location on a rocky spur overlooking the Upper Rhine Plain; as a result it was used by successive powers from the Middle Ages until the Thirty Years' War when it was abandoned. From 1900 to 1908 it was rebuilt at the behest of the German emperor Wilhelm II. Today it is a major tourist site, attracting more than 500,000 visitors a year. The Buntsandstein rock was first mentioned as Stophanberch (Staufenberg) in a 774 deed issued by the Frankish king Charlemagne. Again certified in 854, it initially was a possession of the French abbey of St Denis and the site of a monastery.he ruins had been listed as a monument historique of the Second French Empire since 1862 and were purchased by the township of Sélestat (Schlettstadt) three years later. When after the Franco-Prussian War of 1870/71 the region was incorporated into the German Imperial Territory of Alsace-Lorraine, the citizens granted the remnants of the castle to the German emperor Wilhelm II in 1899. Wilhelm wished to create a castle lauding the qualities of the medieval time of Alsace and more generally of German civilization stretching from Hohkönigsburg in the west to (likewise restored) Marienburg Castle in the east. He also hoped it would reinforce the bond of Alsatians with Germany, as they had only recently been incorporated into the newly established German Empire. The management of the restoration of the fortifications were entrusted to the architect Bodo Ebhardt, a proven expert on the reconstruction of medieval castles. Work proceeded from 1900 to 1908. On May 13, 1908, the restored Hohkönigsburg was inaugurated in presence of the Emperor. In an elaborate reenactment ceremony a historic cortege entered the castle, under a torrential downpour. Ebhart's aim was to rebuild it, as near as possible, as it was on the eve of the Thirty Years' War. He relied heavily on historical accounts, but, occasionally lacking information, he had to improvise some parts of the stronghold. For example, the Keep tower is now reckoned to be about 14 metres too tall. Wilhelm II, who regularly visited the construction site via a specially built train station in nearby Saint-Hippolyte, also encouraged certain modifications that emphasised a romantic nostalgia for Germanic civilization. For example, the main dining hall has a taller roof than it did at the time, and links between the Hohenzollern family and the Habsburg rulers of the Holy Roman Empire are emphasized. The Emperor wanted to legitimise the House of Hohenzollern at the head of the Second Empire, and to assure himself as worthy heir of the Hohenstaufens and the Habsburgs.After World War I, the French state confiscated the castle according to the 1919 Treaty of Versailles; since 2007 the premises are held by the Bas-Rhin departement. In 1993, the restored castle was officially designated as a national historic site by the French Ministry of Culture. Today, it is one of the most famous tourist attractions of the region. For many years it was considered fashionable in France to sneer at the castle because of its links to the German emperor. Many considered it to be nothing more than a fairy tale castle similar to Neuschwanstein. However, in recent years many historians have established that, although it is not a completely accurate reconstruction, it is at least interesting for what it shows about Wilhelm II's romantic nationalist ideas of the past and the architect's work. Indeed, Bodo Ebhardt restored the castle following a close study of the remaining walls, archives and other fortified castles built at the same period. Parts of the 1937 film La Grande Illusion by Jean Renoir were shot at Haut-Kœnigsbourg.

How To Get To Chateau du Haut-Kœnigsbourg (Map):