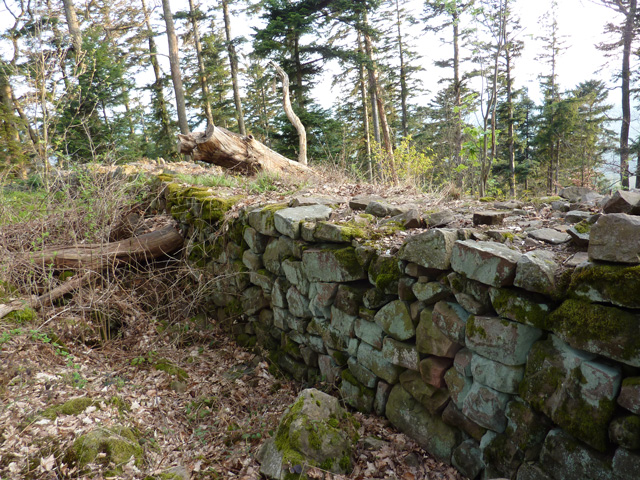 Location: Oberhaslach, in the Bas-Rhin departement of France (Alsace Region).
Built: Unknown.
Condition: Fragmentary remains.
Ownership / Access: State property.
Notes: The Chateau du Petit-Ringelstein (or Chateau du Petit-Ringelsberg) is a ruined castle in the commune of Oberhaslach in the Bas-Rhin departement of France. It is sited on a small summit that it surrounds with its enceinte constructed of dry stone walls.Access to the ruins is possible using the paths provided by the Club Vosgien. It is located on an extension of the path which leads from Oberhaslach to the Château du Grand Ringelstein. The name is derived from the German words Ring (ring or circle) and Stein (stone). A dry stone wall circles the hill top. It measures approximately 61m by 21m, with a height of one metre. It is bordered by a ditch. There is a quarry nearby from which rocks were cut and dressed. They date, probably, from the first third of the 13th century and would have been used for the Château du Grand-Ringelstein or for the Chateau de Hohenstein. Nothing is known of the history of the Petit-Ringelstein. It could have been a primitive form of castle. Its present aspect probably results from a later alteration, perhaps during a siege of the Château de Hohenstein. It has been listed since 1898 as a monument historique by the French Ministry of Culture and is state property.