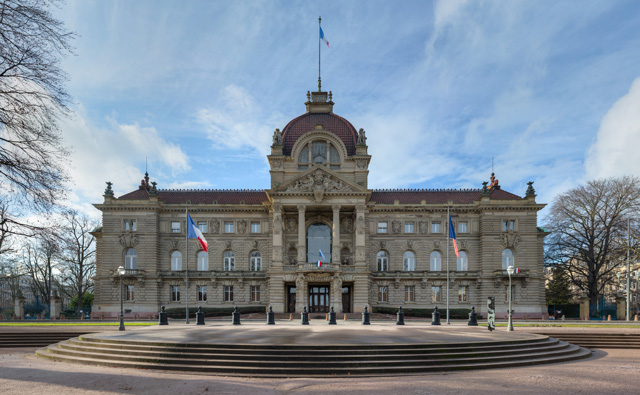 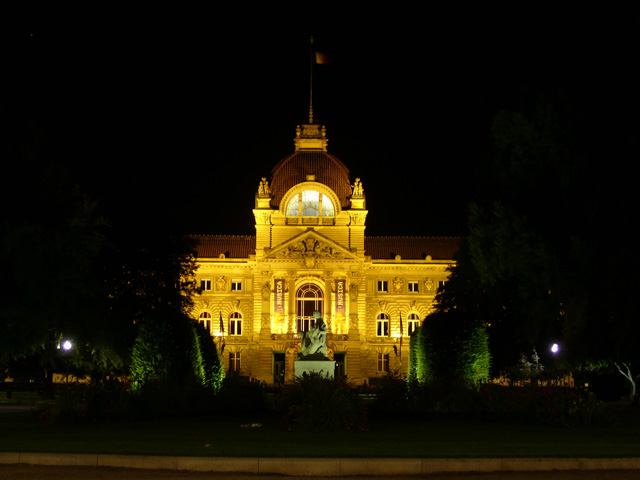 Location: Strasbourg, in the Bas-Rhin departement of France (Alsace Region).
Built: 1884-1888.
Condition: In very fine condition.
Ownership / Access: Now home for Central Commission for Navigation on the Rhine and the Regional Direction of Cultural Affairs.
Notes: Palais du Rhin, former Kaiserpalast (in French, Imperial Palace) is situated in Strasbourg, in Neustadt, on the Republic Square that dominates its imposing dome. With the large garden surrounding it (itself surrounded by wrought iron gates ornate) and stables located behind the building, it forms one of the most complete sets and emblematic of the Prussian architecture. This building is part of the vast urban redevelopment project undertaken at the end of the nineteenth century, after the annexation of Alsace by Germany.During World War II, the building was converted into a military hospital and in 1920, the building takes its current name, when moving within the walls of the oldest of the European institutions: the Central Commission for Navigation on the Rhine . In 1923, the palace passed into the hands of the French state and hosts the service of Fine Arts and the National furniture of Alsace-Lorraine. Transformed into Kommandantur by the Nazis from 1940 to 1945, the building was taken by the troops of Leclerc which transforms it into headquarters. This is where the future Marshal wrote his "proclamation announcing the completion of the oath of Kufra." Threatened with destruction in the fifties by the municipality, it should be replaced by a tower. Thanks to the action of the association "Friends of Old Strasbourg" creates this occasion, he is saved. The Palais du Rhin is a historical monument since 19932, is now home to the Central Commission for Navigation on the Rhine and the Regional Direction of Cultural Affairs (DRAC). The stables of the palace are they classified a historic monument in 2009.

How To Get To Palais du Rhin (Map):