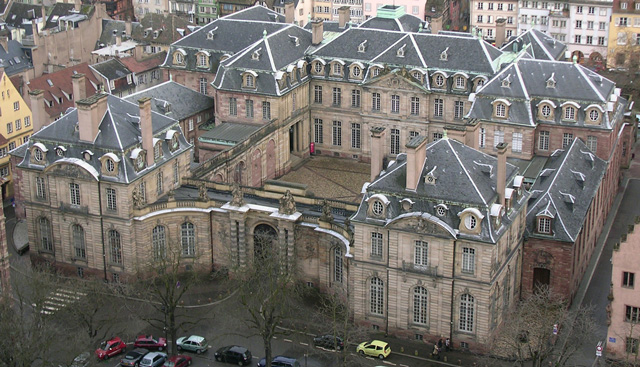 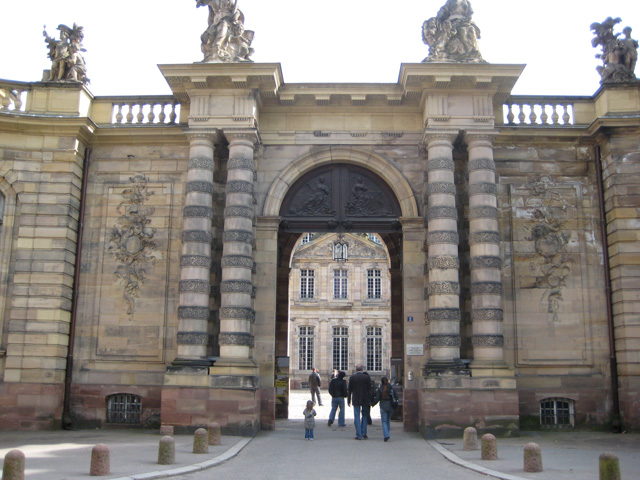 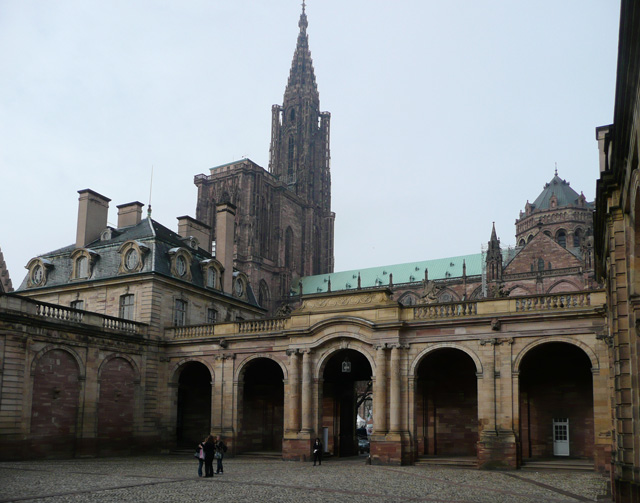 View from the main courtyard to the entrance and the Cathedral Photo - Georg Schelbert - Wikipedia - lic. under CC BY 3.0

Location: Strasbourg, in the Bas-Rhin departement of France (Alsace Region).
Built: 1731-1742.
Condition: In fine condition.
Ownership / Access: --
Notes: The Palais Rohan (Rohan Palace) is one of the most important buildings in the city of Strasbourg in Alsace, France. It represents not only the high point of local baroque architecture, according to widespread opinion among art historians, but has also housed three of the most important museums in the city since the end of the 19th century: the Archaeological Museum (Musèe archèologique, basement), the Museum of Decorative Arts (Musèe des Arts dècoratifs, ground floor) and the Museum of Fine Arts (Musèe des Beaux-arts, first and second floor). The city gallery, Galerie Robert Heitz, is also in a side wing of the palace. The palace was commissioned by Cardinal Armand Gaston Maximilien de Rohan, Bishop of Strasbourg, from the architect Joseph Massol and erected between 1731 and 1742 according to plans by Robert de Cotte. It was built on the site of the former residence of the Bishop, the so-called Palatium, which had been built from 1262 onwards. In 1744, Louis XV stayed in the palace, and Marie Antoinette stayed there in 1770. In 1805, 1806 and 1809, Napolèon Bonaparte stayed there and had some of the rooms changed to suit his tastes and those of his wife, Josèphine. In 1810, Napoleon's second wife Marie Louise, Duchess of Parma spent her first night on French soil in the palace. Another royal guest was king Charles X of France in 1828. From 1872 until 1898, the palace served as the main building of the imperial German Universitat Strasburg, up until the founding and opening of the new "Kaiser-Wilhelms-Universitat". The art collection of the city (previously kept in the Aubette on the Place Klèber, which had been burned after Prussian artillery fire on August 24, 1870) had been completely destroyed during the Franco-Prussian War. As of 1898 and during the course of the re-establishment of the art collection, the palace became the seat of the imperial museums of Strasbourg. On August 11, 1944, the building was damaged by British and American bombs. The restoration of the premises was completed in the 1990s. The Palace is listed as a Monument historique since 1920 by the French Ministry of Culture.

How To Get To Palais Rohan (Map):