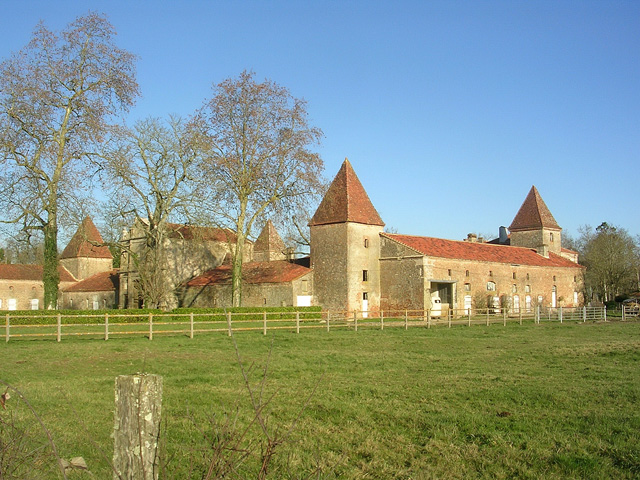 Location: Duhort-Bachen, in the Landes departement of France (Aquitaine Region).
Built: 1073.
Condition: Restored.
Ownership / Access: --
Notes: Abbaye Saint-Jean de la Castelle, founded in 1073, is located duhort-bachen, in the French department of the Landes.Now a stud farm. Formerly called Dei Gratia-Grace or God, the Abbey of Saint John of the Castelle was originally a Benedictine monastery founded probably around 1073 on the banks of the Adour, near the city of Aire-sur-l Adour. Traditionally associated with the Norbertine Order, Pierre Vicomte de Bigorre, cofounder of the Casadei, the reconstructed monastic ruins on the valley around 1140. Nothing is known about the first ecclesiastics who lived there, no prior document 1220 having been found. The abbey, which belonged to the domain of Biscay, suffered much the Wars of Religion. The Huguenots of Montgomery devastated it in 1568 and 1570, murdering and burning religious library and archives. After a fire in 1728, a new monastery was built between 1740 and 1760 in which the novitiate was hosted domain. In 1766, there were six priests in the monastery and fourteen in the parish. In 1789, the ten still present clergy were forced into exile during the Revolution. The building became a castle; the buildings are still intact, hoping to restore the religious remained. However in 1832, the chapel and the monastery were destroyed. The castle was then converted into stud farm. The entrance gate was dismantled in 1839 and transported to the Castle where it is reassembled Amu.

How To Get To Abbaye Saint-Jean de la Castelle (Map):