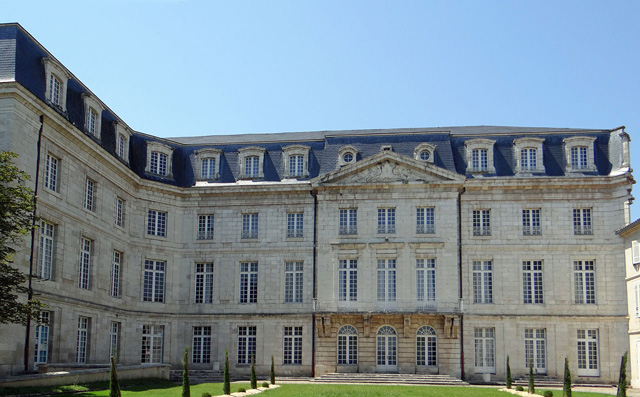 Location: Aiguillon, in the Lot-et-Garonne departement of France (Aquitaine Region).
Built: 1750.
Condition: Restored.
Ownership / Access: Privately owned.
ISMH Reference Number: PA00084059
Notes: Château d'Aiguillon is a building in the French town of Aiguillon, instead of 14 July, in the French department of Lot-et-Garonne. The castle was built for Emmanuel-Armand de Richelieu, duc d'Aiguillon, Duke of Aiguillon to the death of his father in 1750. The north wing symmetrical to the south wing, was never built. The last phase of work, from 1778 to 1780 focused on the construction of the pavilion Comedy south, in symmetry with the common. The Duke and Duchess of Aiguillon vivrent returns to Paris in 1782. The castle is unfinished at the death of the Duke in his mansion in Paris in 1788. The facades and covers the main building and those of the left, and the wrought iron railing of the stairs between the first floor and the attic are registered as historical monuments registration by order of 20 June 1925. A new decree dated August 4, 1951 registered as historic monuments facades and the roofs of two buildings bordering the courtyard. The castle was restored in 1964-1966 by Jean Payen14. It is affected since high school Stendhal.