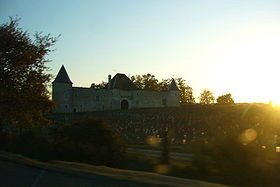 Location: Cadaujac, in the Gironde departement of France (Aquitaine Region).
Built: 12th century.
Condition: In good condition.
Ownership / Access: --
Notes: Château d'Eck formerly Chateau Freytets, is a winery located in the Gironde Cadaujac. Located in AOC Pessac-Leognan. Built at the end of the twelfth century, its former name was "Freytets", which means "Fruit" 2. He took that of the nineteenth century Château d'Eck, the name of a former owner. In a medieval radiation, four towers with loopholes and a wall..