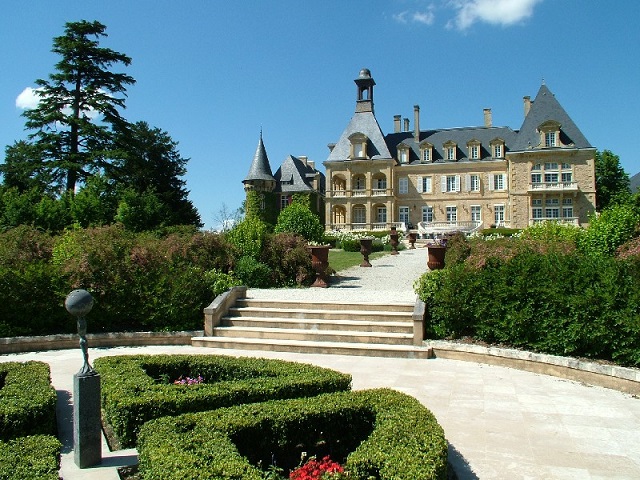 Location: Aquitaine, in the Lot-et-Garonne departement of France (Aquitaine Region).
Built: 15th century.
Condition: --.
Ownership / Access: Private property.
Notes: The castle of Essendiéras is the name borne by a group of two French castles which are located in Aquitaine region, in the Dordogne department, in the commune of Saint-Médard-d'Excideuil. After having been an important agricultural field and then of apple production, the domain evolved towards a tourist concept.Originally a stronghold of the owners of a forge on the Loue then noble lair, the manor is bought in 1793 by the Pouquet family as national property. The central body of the Château Neuf was built around 1850 by Pierre-Chéri Pouquet then proprietor, in order to live in a more comfortable and adapted dwelling at the time. In 1905, his son Eugene, a stockbroker in Paris, decided to expand, in order to receive more guests. The central body is then surrounded by lateral bodies, as well as two turrets to the north. As for the interior of the castle of 1850, it is refurbished. The work was completed in 1908, and the whole has since remained unchanged. The estate also houses several houses, hamlets and old farm buildings of the early 20th century, restored and intended for the hotel and tourism industry. By alliance, the whole falls to the Arman family of Caillavet. In 1926, Simone de Caillavet, wife of letters, married the novelist André Maurois in the neighboring village of Saint-Médard-d'Excideuil, who spent his holidays in Essendieras for forty years. The industrialist Sylvain Floirat bought the Domaine aux Maurois in 1963 and made it a very important orchard of apple trees, covering up to 260 hectares. In the early 2000s, its production was 7,000 tons of fruit per year. In 1999, the castles were bought by a Dutch couple to the descendants of Sylvain Floirat, who died in 1993. In 2001, the same couple acquired the entire domain1. After a stop of apple growing in 2010 (in 2015 there are only ten hectares of orchards left compared to 260 at the beginning of the 21st century), the estate now turns to tourism with gîtes, guest rooms, golf, Swimming pool, camping, tennis.