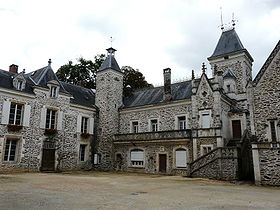 Location: Saint-Priest-les-Fougères, in the Lot-et-Garonne departement of France (Aquitaine Region).
Built: 19th century.
Condition: In good condition.
Ownership / Access: Private home.
Notes: The castle of Oche, is a French castle located in the commune of Saint-Priest-les-Fougères in the department of Dordogne, in Aquitaine-Limousin-Poitou-Charentes.A first castle was built in the fifteenth century. The present castle was rebuilt at the end of the nineteenth century. Property of the French State, it serves as a holiday center during the second half of the twentieth century before being sold in 2006.

How To Get To Château d'Oche (Map):