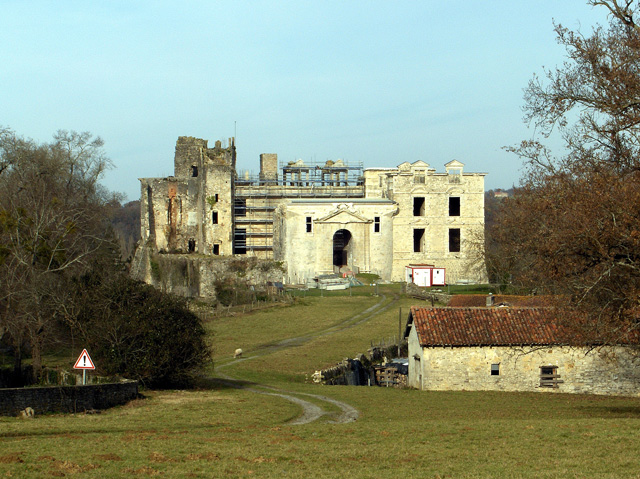 Location: Bidache, in the Pyrénées-Atlantiques departement of France (Aquitaine Region).
Built: 14th century.
Condition: In a state of ruin but currently restored.
Ownership / Access: Privately owned.
ISMH Reference Number: PA00084358
Notes: Château de Bidache is located in the town of the same name, in the French department of Pyrenees-Atlantiques. In the state of ruins, it is a historical monument 6 May 1942. It is being restored. Vaulted stables, its facades and roofs of the two end pavilions are meanwhile registered 19 November 1942 and defensive elements, addictions, and parks and gardens are enrolled September 3, 2012.The castle had still look great October 22, 1793 when the district clerk took stock before the forfeiture to the Nation. On February 23, 1796, Year IV of the Republic, about seven in the morning, everything burned, and there will not be the castle set on fire than what we see today. Many illustrious guests came one evening to meditate in front of these ruins: Napoleon III and Eugénie de Montijo, while the second Duke of Gramont was held in Turin its ambassador. Later came the Prince of Wales, later Edward VII. Gramont family remains true to this high place.