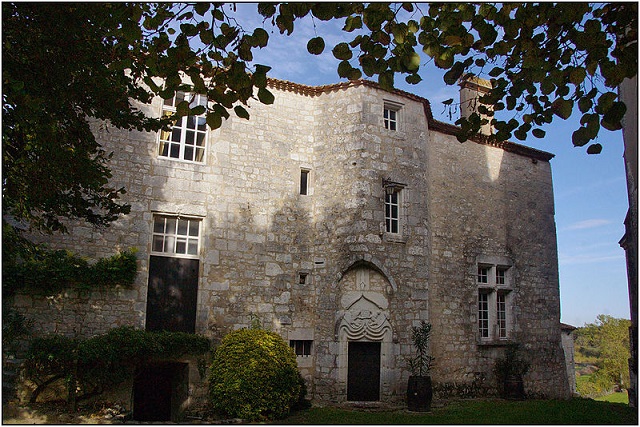 Location: Bouniagues, in the Dordogne departement of France (Aquitaine Region).
Built: 15th century.
Condition: --.
Ownership / Access: --.
Notes: The castle of Bouniagues is located in Purple Périgord, on the French town of Bouniagues in the department of Dordogne, in region New-Aquitaine. The building is protected as historic monuments for the Renaissance door of the presbytery, located on the outer tower.Over the centuries, the castle of Bouniagues reveals some highlights of its history. From the end of the fifteenth century to the end of the seventeenth century, the lords of the castle (Charles, Pierre, Isaac, Louis and Jean de Solminihac) were a branch of the house of Solminihac (including the oldest known in the Archives Nationals was Mathieu de Solminihac (1165-1195). At the beginning of the eighteenth century, following the marriage on 17 August 1701 of a lady of Solminihac (Marie-Charlotte, daughter of Jean de Solminihac) with Pierre de Saint Ours, lord of Clermont, squire, captain of dragoons in the regiment of Saint-Sarlin, the castle passed into the hands of the family of Saint Ours. This union gave birth to three children, including Henri de Saint Ours in 1703. In 1732, Henri (lord of Morin) married Marie de Cosson de La Suderie, born in 1716; They had a son in 1738, named Peter. In 1793, this same Pierre de Saint Ours, a knight of Saint-Louis, lord of Bouniagues, La Baume, Jaubertie, and captain in the regiment of Beauce, was betrayed by one of his servants. He is gagged and bound during his sleep. After the looting of the castle, the henchmen of the revolutionary tribunal of Bergerac put it before daylight on a cart with Anne de Sirvain, his wife, and their eight children. They were already near Bergerac, when the peasants of Bouniagues, armed with muskets, pikes, and scythes, who delivered them at the approach of the village of Madeleine, After having put to flight the agents of the Revolution, they brought back to the castle of Bouniagues the whole family of Saint Ours, whom they no longer dared worry about. Pierre de Saint-Ours died in 1806 at the age of sixty-eight. In 1875, the mayor of Bouniagues, Martial Delpit de Castang, bought the castle and retroceded half of it (the western part) to the commune of Bouniagues, who installed the presbytery there.

How To Get To Château de Bouniagues (Map):