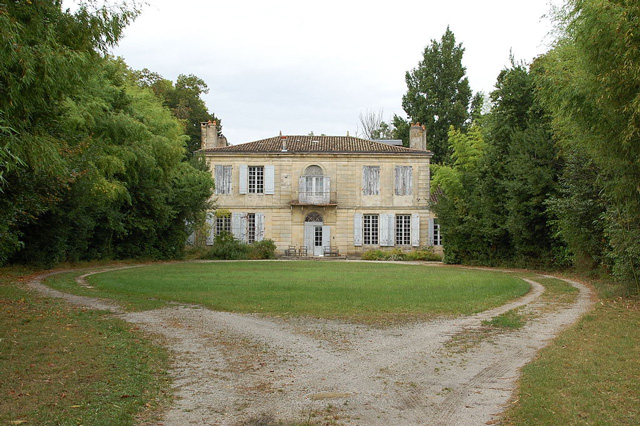 Location: Saint-Médard-en-Jalles, Gironde departement of France (Aquitaine Region).
Built: 1788.
Condition: In good condition.
Ownership / Access: Privately owned.
ISMH Reference Number: PA00083785
Notes: Château de Bourdieu is a privately owned chateau in Bourdieu with a fleet of thirty hectares in the center of Saint-Médard-en-Jalles face instead of the Republic. Joined the Historiques1 Monuments February 6, 1981 under the PA00083785 reference, the current house was built in 1788 by J. Delmestre, Note in a vineyard (bourdieu in Gascon) owned in 1737 at the Royal broker Delmestre. The property is on a plan4 1848. The castle, facing southeast, consists of a high building body of a stage flanked by two side pavilions bungalow. The central part, slightly projecting, welcomes the medians double doors separate two groups of two windows on the ground floor as upstairs. They are surmounted by semicircular arches, the one of the ground floor is decorated with moldings. Transoms are closed 8 tiles arranged in an arc in a radiating pattern forming four angular sectors of 45 °. The transom of the ground floor is defended by an ornate piece of ironwork J.D. initials J. Delmestre in a medallion. The top door opens onto a wrought iron balcony, the front door on a stoop two steps. Continuous bosses chaining jumps and structure the façade, while the north side has not. The old furnaces are still present in the kitchen. The field of Bourdieu had a raised quality park with many trees. This park, whose trees were older, has suffered greatly from the 1999 storm.