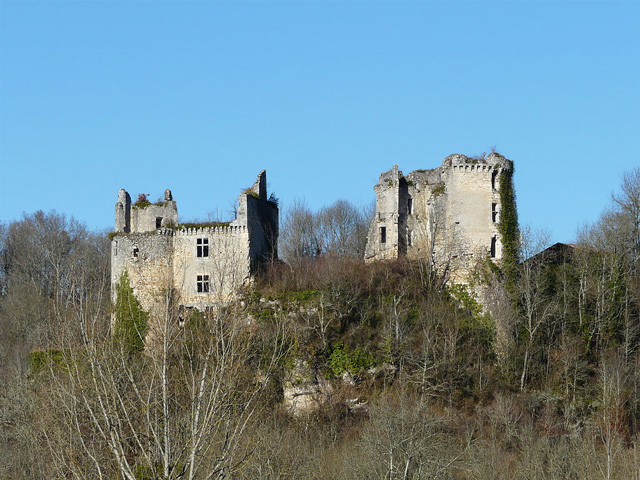 Location: Saint-Pierre-de-Côle, in the Dordogne departement of France (Aquitaine Region).
Built: 12th, 15th, 16th century.
Condition: Ruins.
Ownership / Access: Privately owned.
ISMH Reference Number: PA00082889
Notes: Château de Bruzac is a French château located in the municipality of Saint-Pierre-de-Cole, in Dordogne, in the Aquitaine region. In a state of ruin, it is actually composed of two ancient castles juxtaposed. It dominates the Cole Valley which flows at its feet. It is a listed building September 27, 1948, and visited. The first lord of Bruzac, Helie Flamenc, appears in 1040 in a deed of gift to the abbey of Uzerche. His son, Guy, is mentioned as a donor to Vigeois monastery in 1112 and 1143. In the following century, in 1244, following an inheritance, Flamenc brothers share the site. This is probably from that date two castles will mingle with Bruzac. In 1258, a dispute between the viscounts of Limoges and those of Rochechouart to the suzerainty of the co-lordship. Guy VI, Viscount of Limoges, recovers Lower Bruzac and his lords, Raoul and Bernard Flamenc, enter his vassalage. Aimery IX, Viscount of Rochechouart, recover Haut-Bruzac and his lord, Helie Flamenc. At the end of the thirteenth century, the Lower Bruzac is no longer in the hands of Flamenc because it now belongs to a certain Helie de Neuville. During the Hundred Years War, the English occupied the premises before being driven out in 1404-1405 by the lord of Albret, Constable of France. During the 1547 years, John Gontrand, Lord of Biron and Bruzac for six years, gives Lower Bruzac Geoffroy Marthonie. But in 1583, the future Henry IV gives his adviser Philippe de Mornay and thus robs family Marthonie. This is again mentioned as owner in 1667. By marriage, Lower Bruzac goes to the family of Baron Beynac, then the Count de Bonneval - César Phoebus François - in 1764 and the Beaumont family in 1773. At the French Revolution, the castles are abandoned and become stone quarries.