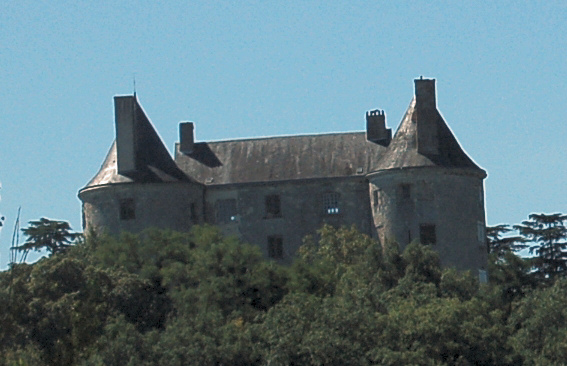 Location: Barbaste, in the Gironde departement of France (Aquitaine Region).
Built: 11th century.
Condition: In good condition.
Ownership / Access: Private.
Notes: The castle of Buzet-sur-Baïse is located in Buzet-sur-Baïse, in the department of Lot-et-Garonne and the region New-Aquitaine.A castellum of the Haut Buzet is mentioned in 963 in an act of the Counts of Gascony. The castle was founded in the eleventh century by Sancho Guillaume, Duke of Gascony, at a time when the construction of castles was developing. The local lords protect their territories at a time when the royal power has virtually disappeared. Several families succeed each other in this castrum, or even divide the castle into coseigneurs, following the division of the estate. One of them occupies the house, a large rectangular room, at the end of the spur, another built a high circular tower.In 1286 the castrum was divided between Guillaume Raymond IV of Pins (or of Piis), Aymeric of Savignac and Bernard of Rovignan. By a deed signed on the 16th of November, 1286, Guillaume Raymond IV de Pins, sire of Taillebourg near Marmande, lord of Moncrabeau, of Mazeret near Mezin, of Calignac, acknowledges to hold of the king of England, Edward I. half, , The castle of Buzet. The castle was plundered and burned down by the English in 1293-1294. The castle was rebuilt shortly afterwards on the substructures of the eleventh century. Bernard d'Albret, lord of Sainte-Bazeille, acquired the castle at the beginning of the fourteenth century. In 1445, Charles d'Albret exchanged the land of Buzet against the seigniory of Sainte-Maure with Louis de Noaillan (or Noailhan). This agreement was ratified by Jean d'Albret, his son, Viscount de Tartas. The castle became the property of the Vicomte de Noaillan, Lord of Frechou. Odon or Odet de Noaillan is lord of Buzet in 1482 at the time of the marriage of his daughter with Charlotte and Marie de Noaillan with Louis II of Lard, lord of Birac, seneschal of Castres.