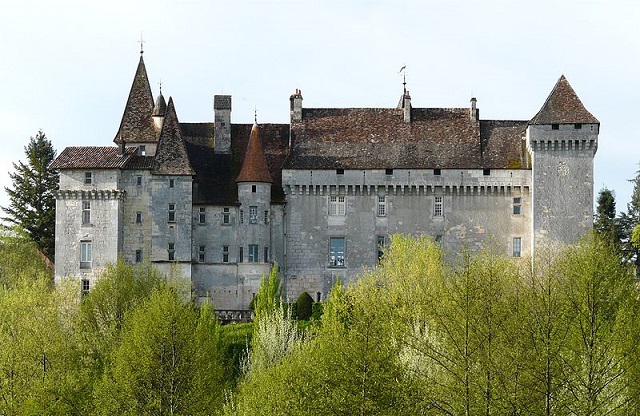 Location: Castelnaud-la-Chapelle, in the Landes departement of France (Aquitaine Region).
Built: 15th century.
Condition: Restored.
Ownership / Access: Gérard of Colombières.
Notes: The castle of Château-l'Évêque, also known as Château Saint-Vincent, is a French castle located in the commune of Château-l'Évêque in the department of the Dordogne, in region New-Aquitaine.Château-l'Évêque is located in the department of Dordogne in the Périgord central in the north of the village of Château-l'Évêque, near the departmental road 939. It overlooks the Mesplier stream, a small tributary of the Beauronne. It is a private property open to visit. The castle is located on the southeast edge of its gardens and west of the parish church of Saint-Julien, which was its former castle chapel.Mentioned in 1329 as Castrum Episcopi, or Episcopal, the construction of the present castle begins in the fourteenth century under the impulse of Bishop Adhémar de Neuville. It continued in the fifteenth and sixteenth centuries, and some arrangements were made until the eighteenth century. It is at the same time a fortress charged with guarding the road which leads from Perigueux to Brantome and Angouleme, as well as, until the Revolution, the summer residence of the bishops of Perigueux. In 1384, Bishop Pierre Tison dies there and is buried in the castle chapel. Around 1515, Bishop Guy de Castelnau built a new house and bays with mullions were opened in 1520. In the second half of the sixteenth century, the Huguenots attacked the castle several times. On July 14, 1575, Pierre Fournier, bishop of Périgueux since 1561, was assassinated by his own servants. On September 23, 1600, Vincent de Paul was ordained priest by Bishop Francois de Bourdeille (or Bourdeilles), either in the castral chapel or in an oratory in a turret of the castle. During the Revolution, the estate was sold as a national asset and defensive elements were eliminated. The castle was listed as a historic monument on October 27, 1938. In the second half of the twentieth century, for a few years, the castle was transformed into a hotel-restaurant called Saint-Vincent Castle, in reference to Saint Vincent de Paul. In 1988, it was the headquarters of "Compagnie Périgourdine", a merchant of goods put into liquidation in December 1992.

How To Get To Château de Château-l'Évêque (Map):