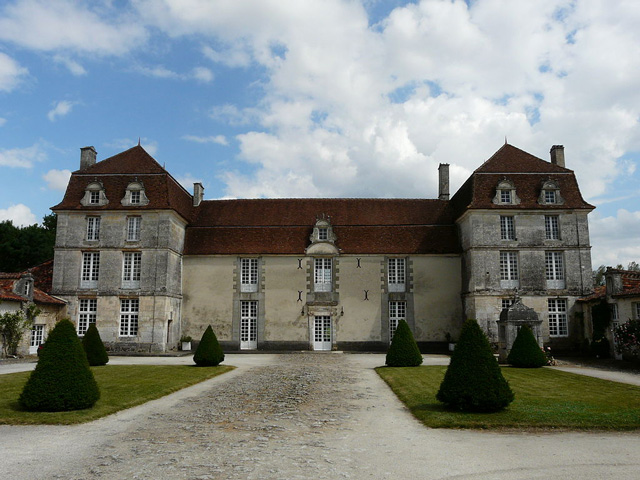 Location: Champagne-et-Fontaine, in the Dordogne departement of France (Aquitaine Region).
Built: 17th to 18th century.
Condition: In good condition.
Ownership / Access: Private property.
ISMH Reference Number: PA00082463
Notes: Château de Clauzuroux (or castle Clauzuroux) is a French château located in the municipality of Champagne-et-Fontaine in the Dordogne, in the Aquitaine region. It was built in the seventeenth and eighteenth centuries. It is located on the edge of towns to La Chapelle-Grésignac Cherval and on whose territory the park and several outbuildings are located. The castle and the whole area is subject to registration under the Historic Monuments. The likely site of a former medieval mansion, Castle Clauzuroux is attested in the mid-sixteenth century as property of the family Faucher. It comes in the form of a square about 50 meters square, the center of which is an inner courtyard. northwest side, the two round towers, north and west, date back to the seventeenth century and the pediment of the portal is dated 1701. southeast side, the house, the courtyard façade is more recent than the garden, has a ground floor topped by a floor. It is flanked by two pavilions, a higher floor. The home like pavilions are topped with mansard roofs which stand skylights. The other sides of the square are occupied by dependencies on one level. In the courtyard there is a covered well. southeast side, a terrace leads to a reach, once powered by the waters of Pude and dry today, that turned the water mill area. A hundred meters upstream, the reach has an architectural feature: a water staircase. On the other side of the reach extends a French garden, accessible by a bridge. Beyond this garden runs the Pude. A hundred meters west of the castle, a pigeon stands on the roadside. Castle Clauzuroux is registered as historical monuments by order of 16 December 1947. The rest of the area including the park, the garden, the French garden, the pigeon, the "house manager", a barn, the water mill, the feed mill race, a water staircase is registered by order of 17 December 2002.

How To Get To Château de Clauzuroux (Map):