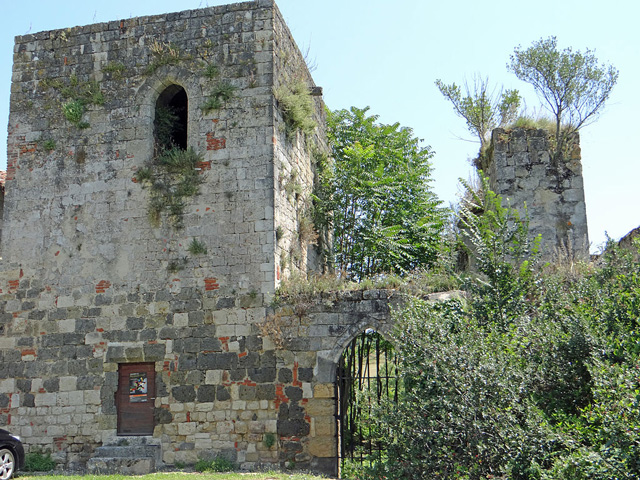 Location: Clermont-Dessous, in the Lot-et-Garonne departement of France (Aquitaine Region).
Built: 14th century.
Condition: Ruined.
Ownership / Access: Owned by the Municipality.
ISMH Reference Number: PA00084094
Notes: Château de Clermont-Dessous is located in Clermont-Dessous in the department of Lot-et-Garonne and the Aquitaine region. The hill on which is built Clermont-Dessous dominates the Garonne and controls the right bank near Port-Sainte-Marie. The mound had to be fortified in the eleventh century. The castle protects the lower part of the hill, near the neighboring hills; it is cut off from the village by a moat. The parish church of St. John the Baptist was also the chapel and took part in the defense of the castle. In 1221 the castle was besieged unsuccessfully by Amaury de Montfort. The castrum is mentioned for the first time in the Saisimentum of 12711. It depends on the "baylie" of Port-Sainte-Marie; the castle played an important role during the Hundred Years War; his dungeon must date from the thirteenth century or early fourteenth century. The castle fell into disrepair in the nineteenth century and partially restored, is registered as historical monuments June 20, 1950.