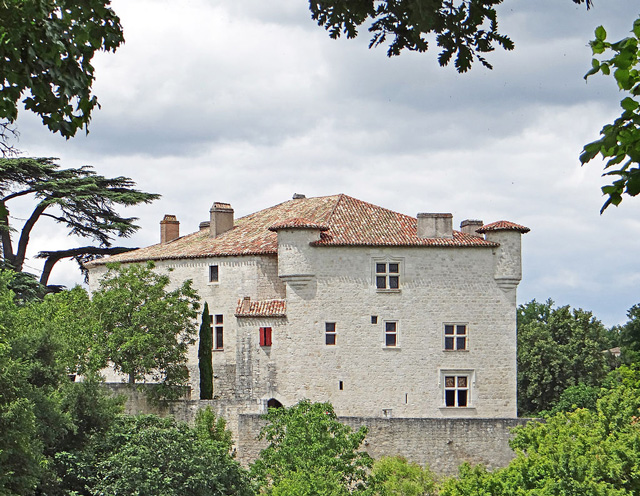 Location: Engayrac, Lot-et-Garonne departement of France (Aquitaine Region).
Built: 12th, 17th century.
Condition: Ruined.
Ownership / Access: Privately owned.
ISMH Reference Number: PA00084109
Notes: Château de Combebonnet is a castle, situated on the territory of the town of Engayrac in Lot-et-Garonne. It dominates the valley Gandaille. At the end of the thirteenth century document cites Combabonneti villa. The term villa meant at the time a rural farm protected by a small fortress. This small fortress would gradually turn into castrum. The original castle, quite small, had the shape of a triangle, whose angles east and west were topped by bartizans in cantilever. Both of these sides were built on a rock which increased its defenses. The third side was the weak point, facing the plateau. The automaker had planned to increase its defenses by giving the opportunity to ride a wooden hourdage to protect the base of the wall. This small castle should date from the thirteenth century. Then added a square tower at the northeast corner of deadly army in flared cross. This type of murderous appears in the Gascon castles in the thirteenth century. The castle was enlarged and remodeled in the late fifteenth century or early sixteenth century. In the southwest corner was built a staircase with steps and wooden screws. It is probably at that time that were built the chapel and enclosure to protect blottiées few houses near the castle. In the seventeenth century the castle was further enlarged on the north side and took its present appearance. We built two semicircular gates giving access to the courtyard and ornate columns. At the end of the court, the gate of the stable is dated 1643. To the west, a few steps from the castle is a flat apse chapel of four bays, vaulted ribbed vaults. On badges, inside the chapel, was engraved the arms of the family of Beauville. troublemakers of the country, in 1790, threatened to burn the castle. The castle was registered as a historic monument in 1964 and the tower is ranked in 1988.