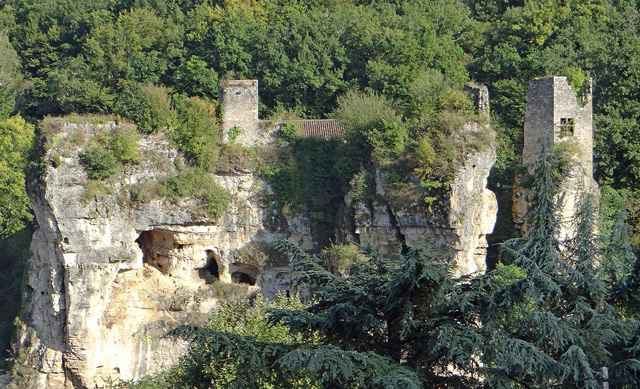 Location: Cuzorn, in the Lot-et-Garonne departement of France (Aquitaine Region).
Built: 13th century.
Condition: Ruins.
Ownership / Access: Property of the municipality.
ISMH Reference Number: PA00084099
Notes: Château de Cuzorn is a castle, situated above the village of Cuzorn and the Lémance valley in Lot-et-Garonne. The Cuzorn site is established in a narrow part of the Lémance valley and allows you to control access but we do not know its origin. The first mention of Cuzorn was found in the ruins of the abbey Belleperche on an inscription dated 1242 mentioning a B. Cuzorn. The castle was bought in 1953 by Georges Rastel, honorary prefect, paymaster general of the Channel. Rastel George and his family have done significant work there to transform the site. The castle was bought in 1995 by Thierry Delrieu. The ruins themselves the castle became the property of the municipality in 1996. The castle was listed as historic monuments in 1950.