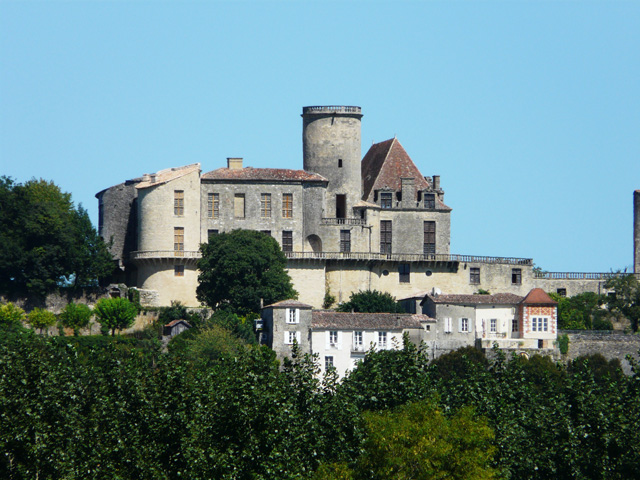 Location: Duras, in the Lot-et-Garonne departement of France (Aquitaine Region).
Built: 12th century.
Condition: In good condition.
Ownership / Access: Owned by the Municipality.
ISMH Reference Number: PA00084107
Notes: Château de Duras is located in the town of Duras, in the department of Lot-et-Garonne and the Aquitaine region. It is a historical monument 3 May 2002. The castle has attracted much lust during the wars of religions. There was a time a Protestant stronghold and Jeanne d'Albret even made for some time to his seat. In the seventeenth century it was the residence of the Durfort, dukes of Duras. It was at this time that the castle of Duras turned into pleasure residence to which is added the French gardens. The first Duke of Duras, Jacques-Henri de Durfort, began in the last quarter of the seventeenth century the reconstruction of all the main building. Common are covered by a terrace which forms a courtyard after the front door. We do not know the exact dates of construction. Jean-Baptiste de Durfort built the main building of the entrance, said the little castle in the early eighteenth century. Robert maps of undated Cotte present projects of a forecourt with an orangery, a chapel and stables probably built in the years 1730. The great hall of the castle hosts 1300 people for a religious ceremony in 1738. Emmanuel -Félicité Durfort seems to have done important work in the castle. After the emigration of the Duc de Duras in Germany, the Chateau de Duras is declared national property. Its doors were forced and the castle was looted. The citizen Joseph Lakanal, extraordinary member of the Convention for the departments of Lot, Lot-et-Garonne, Gironde and Dordogne, demolished the castle towers to use the stones for the construction of locks on the Dropt . The properties were sold in November 1793, but the castle remained the property of the State until 1807. It goes on sale June 20 1807. It was bought for 27 June 4575 francs by the last Duke of Duras returned to France. He also bought the farms of Lagarde and Fougassière. The castle of Duras went through family wedding Chastellux. Henri Paul César Chastellux, great-grand-son of the late Duke of Duras, is the owner in 1864. He sold the castle November 20, 1883 Jean-Baptiste Joseph François Aureille, parish priest Archpriest of Duras. He wanted to transform the castle, to the hall of the marshals Duras the church, presbytery and install the free schools for boys and girls in the old main building. The death of the priest in 1900 stopped the project of transformation. The castle then passed between several owners. Castle deteriorates. In 1969 he was bought by the town of Duras who does classify and began its restoration. The roof of the east wing was restored in 1975. The basements are restored in 1980-1990. First registered as historical monuments July 7, 1948, it is classified in part November 6, 1970 and February 14, 1989 for the castle, the small castle and courtyard. The decree of May 3, 2002 Castle Class' with all the buildings that compose it and its courses, warren and terraces and retaining walls "2.14. In 2002, the castle is classified major site of Aquitaine.