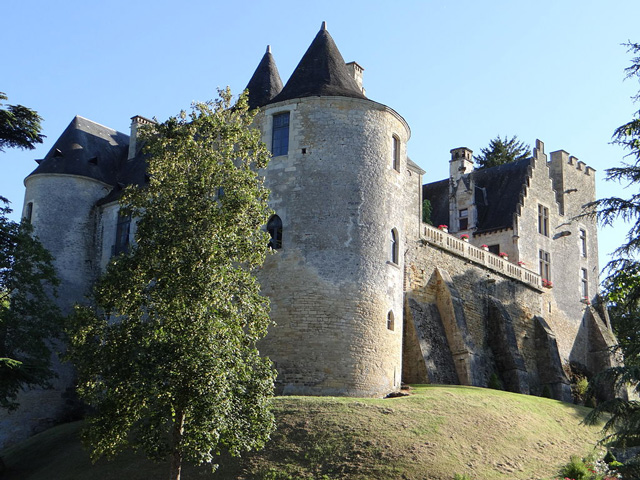 Location: Castelnaud-la-Chapelle, Dordogne departement of France (Aquitaine Region).
Built: 15th-19th century.
Condition: Restored.
Ownership / Access: Private property, Not open to public.
ISMH Reference Number: PA00082447
Notes: Château de Fayrac is a French home of the fifteenth, sixteenth and nineteenth centuries built at the edge of the Dordogne, in the municipality of Castelnaud-la-Chapelle in the Dordogne. Fayrac name appears in an inventory of church property in the thirteenth century. It is then a modest stronghold that left the actual castle that vaulted cellars and a round tower. The name is then written Afayrac or Affeyrac. The castle was then owned by the composer Fernand FOUANT of Tombelle, a founder of the Schola Cantorum, which was heavily restored. André Malraux lies a few weeks at the castle when he joined the Resistance after the arrest of his brothers after March 1944. Just like its illustrious neighbors, Beynac, Castelnaud, Milandes and Marqueyssac, it is part of the tourist complex called the "valley of the six castles." The castle is the subject of a registration as a historic monument since March 31, 1928. Private property, it is not open to the public.