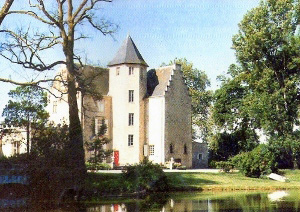 Location: Bègles, Gironde departement of France (Aquitaine Region).
Built: --
Condition: In good condition.
Ownership / Access: Bastard Crisnay Family.
ISMH Reference Number: PA00083135
Notes: Château de Francs, located in Bègles (Gironde) is classified in the supplementary inventory of monuments historiques1 and its park and its surroundings. In the twelfth century, the Castle of Francs feudal fortifications surrounded by fences, ditches, gardens, ponds and a mill on the Estey (small streams that empty directly into the Garonne) was known "La Motte Bègles." November 18, 1965, the prefecture of the Gironde confirms the ranking of the site, its park and its surroundings. In June 1969, the main tower of the castle Franks is struck by lightning, causing a spectacular fire. In 1970, the amiable small pavilion "The Twelve Gates" disappeared, carried away by the urban layout of the Bordeaux ring road. Maurice Bastard, heir and owner of the castle, decided to undertake a major restoration in close collaboration with the architect of France chief building to maintain this beautiful historic house Gironde. Thus, January 27th, 1975, Castle Franks was officially registered in the inventory of historiques1 monuments and environment of listed site, the area is open to the public once a year for the Heritage Days. Castle Franks still belongs to the family Bastard Crisnay, descendant of Charles Balaresque.