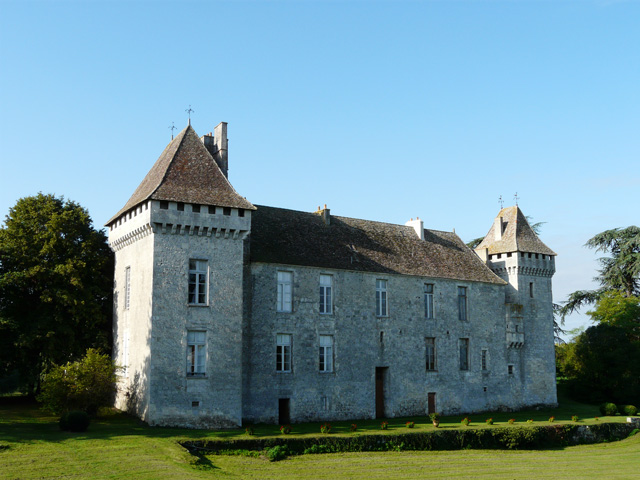 Location: Gageac-et-Rouillac, in the Dordogne departement of France (Aquitaine Region).
Built: Originally made as a dungeon around 11th and 12th century.
Condition: In good state.
Ownership / Access: Family de la Verrie de Vivans.
ISMH Reference Number: PA00082563
Notes: Château de Gageac is an ancient monument from the 12th/14th/18th centuri?es. It is a château located near Gageac-et-Rouillac in the Dordogne department in south-west France. Constructed as a fortress in the 12th century, it was besieged in 1377 during the Hundred Years' War by troops loyal to Charles V of France. Later it was converted to a residence, and it has been in the ownership of the de Vivans family for six generations. A large dovecote facing the castle is a notable feature.On the wine trail between Bergerac (18 km) and Sainte-Foy-la-Grande (12 km), this castle is one of the most charming of South Bergerac, overlooking the Dordogne valley and surrounded by vineyards, whose wine has an international reputation. Its architecture with simple and imposing lines makes this castle one of the most harmonious of the region. Its location was chosen to be a stronghold of the castle of Duras. Duras is located about twenty kilometers south and it belonged to the Dukes of the same name belonging to the Durfort family. Gageac faced the Dordogne valley and Laforce another stronghold. There may have been animosity between the two Duchies. The original 12th-century fortress was only composed of a square tower - the keep (west side). The keep, which was the only stone building, was defended by wooden fortifications. The entrance is situated on the first floor which is reached by a ladder that was removed when attackers came. They sent carrier pigeons to deter Duras (there are traces of putlogs (nests) over the guard room). This keep is divided into two main parts: one is called the "guard room" located in the highest part, lighted by a window which can be seen on the north side. Its access is by a strange staircase, which was built in the thickness of the walls. The other room is barely lit (only by a basement window), with access from the first floor, and the ground level of the rock is the dungeon or oubliette. It was used as a store for food or weapons, and is entered using the ladder also used to access the tower. During the Middle Ages, men who were guarding the tower were housed there. Duras provided weapons and maybe some horses. But Gageac had to organize its own food; this is the reason why we find in old books "the robbers of Gageac just skimming the outskirts of the Madeleine." Gageac was later expanded. Another building separate from the dungeon was built to house the troops. It was possible to move from one building to another with the help of a removable panel on the first floor. When the English invaded the region, Gageac was burned and rebuilt, but the dungeon remained intact. Around 1350, the castle was enlarged by adding a tower whose framework was the work of a marine architect. The dry moat surrounding the current buildings was protected by wetlands. A second wall, flanked by watchtowers, stood outside the moat. It was a fortress, in modern terms a garrison house.Gageac still belongs to the family de la Verrie de Vivans originating from Siorac-en-Périgord, descendants of the famous Captain Geoffrey de Vivans. The family have owned the property for six generations.

How To Get To Château de Gageac (Map):