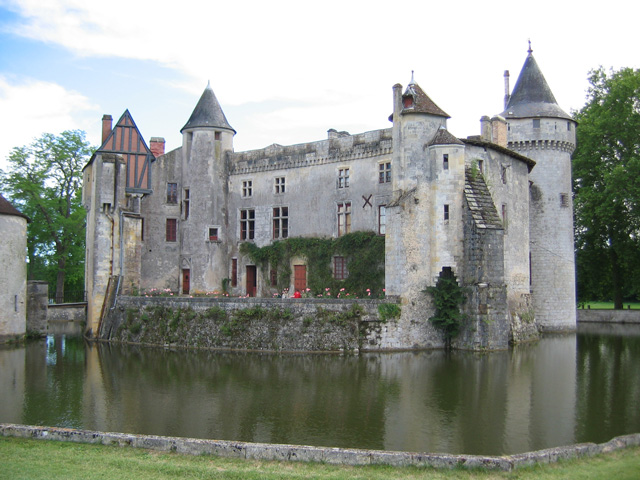 Location: La Brede, in the Gironde departement of France (Aquitaine Region).
Built: 14th century.
Condition: Currently under restoration.
Ownership / Access: Private property.
ISMH Reference Number: PA00083490
Notes: The Château de La Brède is located in the town of La Brede, in the French department of Gironde. The writer and thinker Montesquieu was born in these places in 1689 and it drew much of his work. The whole area is a historical monument on May 7, 2008. Built from the fourteenth century, the castle of La Brede is originally a Gothic castle, surrounded by moats and provided with a defensive system . Charles-Louis de Secondat, Baron de Montesquieu, was born here on January 18 1689. He lived there regularly all his life and wrote many of his books, including The Spirit of the Laws. But there are also effected transformations, including a French garden, currently undergoing restoration, and English garden. You can see the room of Montesquieu, preserved in its state of the eighteenth century, and its library, whose books were transferred to the municipal library of Bordeaux. The castle belonged to the same family, that of Montesquieu, between the tenth century and 2004, when died the Countess Jacqueline de Chabannes (1912-2004), the last direct descendant of the writer (descendant of Denise, her youngest daughter ), which in 1994 was given by dation at the municipal library of Bordeaux all books and documents in his possession3. Since then, the castle is owned by a private foundation.

How To Get To Château de La Brède (Map):