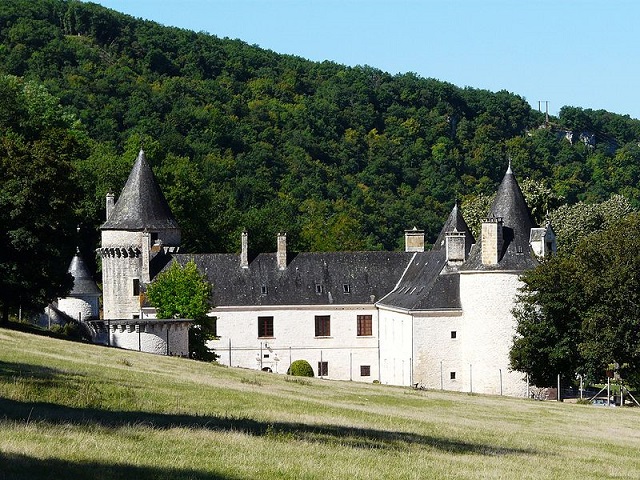 Location: Dordogne, in the Lot-et-Garonne departement of France (Aquitaine Region).
Built: 12th century.
Condition: Hotel.
Ownership / Access: --.
Notes: Chateau de la Fleunie is a castle located in the Dordogne region in the Aquitaine-Limousin-Poitou-Charentes region, south of the commune of Condat-sur-Vézère.Built in the twelfth and fifteenth centuries on the left bank of the Vézère, the castle of Fleunie faces the castle of Petite Filolie established on the other bank. This noble lair is mentioned (Mansus de la Frunya) as early as 1406. In 1760 it had high justice over two villages in Condat. It consists of a logis flanked by round towers, decorated with Renaissance dormer windows and extended at right angles by a wing flanked by a tower with machicolations. Its history is intimately linked to the Hospitallers of St. John of Jerusalem, which later became the Order of Malta, and its commandery was in Condat, the chief town of the order of Malta in Perigord. It was the Viscounts of Turenne who allowed the Hospitallers of Saint John of Jerusalem to settle in Condat in thanks for the services rendered during the first crusades. In 1128 the religious and military order of the Templars was created in Palestine. On several occasions they entered into conflict with the hospitallers, who, like them, had commandies in Europe and Palestine. Over the centuries, the Chateau de la Fleunie has become a pleasure residence inhabited by the local lords, owners of vast expanses around the castle dedicated to the cultivation of the vine and the breeding. One of the entrances to the inner courtyard is decorated with bunches of grapes sculpted in the stone marking the entrance of the cellars of the castle and the stables of the time have now become a vast reception room where are organized banquets, weddings and Seminars. After a restoration in 1990, it is today a luxury hotel-restaurant, known as "Château la Fleunie"; With the addition of a contemporary section, there are 33 rooms that are offered to visitors. The restaurant room with wooden beams decorated by hand houses the gourmet restaurant of the castle.