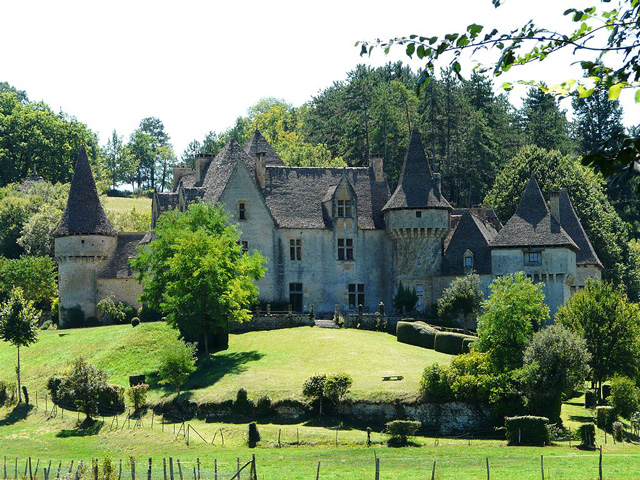 Location: Saint-Amand-de-Coly, in the Dordogne departement of France (Aquitaine Region).
Built: 15th-17th century.
Condition: In good condition.
Ownership / Access: Privately owned.
ISMH Reference Number: PA00082793
Notes: Château de la Grande Filolie is a French castle located south of the provincial road 704, southwest of the town of Saint-Amand-de-Coly in the Dordogne, in the Aquitaine region. The castle gets its name from an ancient oil mill that was installed on the creek. There were eleven sites called "The Filolie" in the Dordogne in 1873. Its roof covered with slate and towers with battlements make it an outstanding architectural ensemble. The castle was built in the fifteenth in the seventeenth century. The oldest part is the small body of northeast building that has a plan in L. The vast body building west built on a vast vaulted cellar for chest had to be constructed in the early seventeenth century. This wing is flanked by two square towers. The west wall is crowned with battlements with shooting holes showing the insecurity in the region. court side, the wing has skylights pediments crowned with a shell. In return for this wing, southeast, entry is found with a passage surmounted by a gatehouse. It continues with the chapel dedicated to St. Mary of the design that had to be built in the seventeenth century. The chapel is extended by a building for housing the concierge who finishes with a tower crowned with battlements and topped with a pepper shaker high. The east wing was destroyed after 1892. The 1892 map shows that this wing included common, with dryer, shop and bakery. She closed the courtyard.