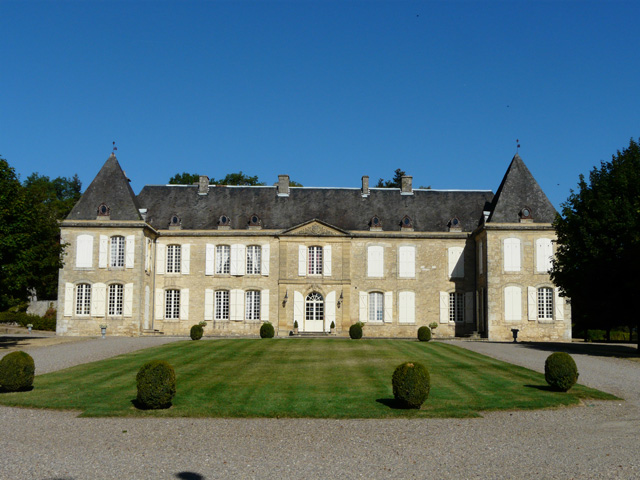 Location: Castelnaud-la-Chapelle, in the Dordogne departement of France (Aquitaine Region).
Built: 18th-19th century.
Condition: In good condition.
Ownership / Access: Privately owned.
ISMH Reference Number: PA00082448
Notes: Château de Lacoste is a French chateau is located in the municipality of Castelnaud-la-Chapelle, in Dordogne, in the Aquitaine region. The castle is the subject of protection as historical monuments and park is a conservation area. Based on an eighteenth century mansion built in the nineteenth century the current castle of Lacoste. The set comes in the form of a building of about thirty meters long with ground floor and floor, with a facade of honor, decorated with a triangular pediment, is located west. Northwest and southwest, two prominent square pavilions were built. Another house, twice as wide, was added to the northeast, perpendicular to the first. A third vessel, perpendicular to the preceding, finished construction to the east, the assembly having an L2-shaped structure. The main building is surrounded by common southwest, a courtyard preceded by a portal in the west of French gardens northwest and a neo-Gothic chapel in the northeast is. 18 hectares, the park is a listed site since 16 December 1969. To the north, from the park, the view extends over the Dordogne Valley and two of its iconic castles rivals during the Hundred Years War: Castelnaud, English, left bank two kilometers and Beynac, the french, opposite bank, at nearly five kilometers away. The park also has a fountain and wash house of the eighteenth century and an imposing menhir 3.80 meters high. On 22 December 1970, the Lacoste castle is listed as a historic monument for its facades and roofs. In 2011, scenes from the TV series Rani face in the field.