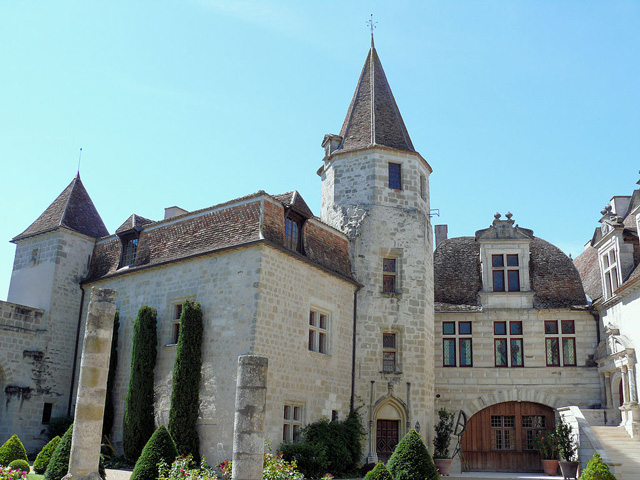 Location: Lauzun, in the Lot-et-Garonne departement of France (Aquitaine Region).
Built: Between 1677 and 1689.
Condition: In good condition.
Ownership / Access: Privately owned.
ISMH Reference Number: PA00084153
Notes: Château de Lauzun is located in the territory of the town of Lauzun. Archaeological excavations in 1991 were discovered in 1992 a double colonnade connecting the two wings of the castle in the extension of the walls of the chapel. The trapezoidal courtyard that was limited by the two wings and the peristyle was paved. North of the courtyard was built a building called the "Dome" connecting the wing to the medieval Renaissance building near the tower where the kitchens were located. Dendrochronological study of the structure showed that it was built between 1677 and 1689. The description of the castle 1784 said 90 years old. Which can be dated from 1685. In the eighteenth century, the dukes of Lauzun are more often the court that their castle is in a state of relative neglect. The courtyard is filled and the porch was partially destroyed before 1784, keeping only a few columns. His stairs built, one in front of the dome and a second in front of the Renaissance chapel. The castle was classified as a historic monument for the two fireplaces and Roman votive altar located in the park on May 1, 1923 and all the facades and roofs on 1 October 1963.