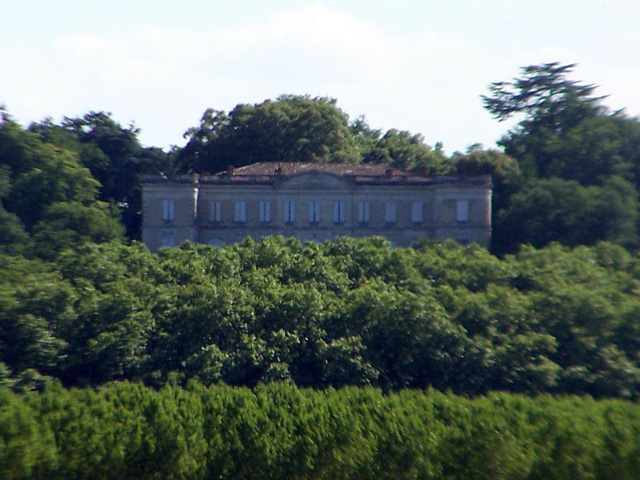 Location: Marcellus, in the Lot-et-Garonne departement of France (Aquitaine Region).
Built: 14th century.
Condition: In good condition.
Ownership / Access: Privately owned.
ISMH Reference Number: PA00084161
Notes: Château de Marcellus is located in the territory of the town of Marcellus and dominates the Garonne valley. A first castle was built on the site in the fourteenth century, perhaps by the Albret family that owns the lordship since 1383. In 1581 Henry of Navarre sells the castle to Aymeric de Gasq, counselor to the parliament of Bordeaux, the family retain until the early eighteenth century. The castle was rebuilt boundary between the sixteenth century seventeenth century as can show the presence of an equestrian portrait of Henri IV on a fireplace. The castle has four pavilions quartered, and the remains of a platform. In the early eighteenth century the castle became the property of the Martin family. In 1742 the manor was erected in the county in their favor. The best known member of this family is the Tyrac Lodoïs Martin, Earl of Marcellus (1795-1861), who negotiated in 1820, when he was secretary of embassy to Constantinople, the purchase of ancient statue called Venus de Milo. In 1772 the two northern half pavilions appetizers are connected by a terrace supported by arches. In 1773, Richard Francis Bonfin, architect of Bordeaux, has prepared the plans and specifications for the Count Joseph André Martin of Tyrac (1745-1789), husband of Suzanne Angelique Piis Beauséjour who had wanted to build a castle in this in law. He monitored the work started in October 1773 by the master mason Joseph Cazade Jolycœur said. The work was completed in October 1775, after destroying the ancient castle except in basement floors. The new castle was built in remployant materials, with a fence around the old houses which have been converted, one chapel, the other library. The castle, the entrance pavilions, the common were registered historic monument August 29, 1986.