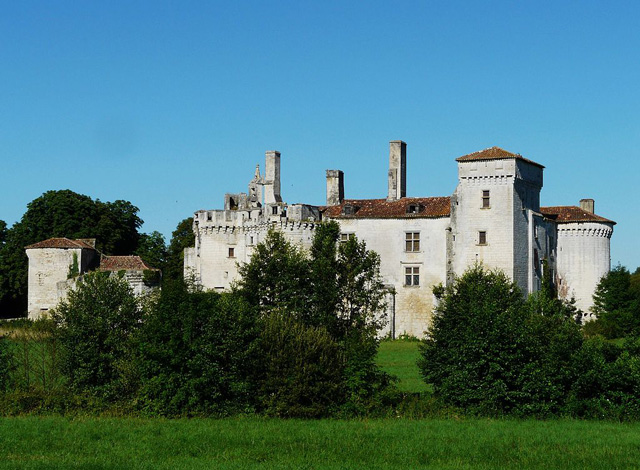 Location: Mareuil, in the Dordogne departement of France (Aquitaine Region).
Built: 16th century.
Condition: In good condition.
Ownership / Access: Now a museum.
ISMH Reference Number: PA00082629
Notes: Château de Mareuil is a French chateau located in the municipality of Mareuil-sur-Belle in the Dordogne, in the Aquitaine region. It is a stronghold of plain. The Mareuil Castle is northwest of the Dordogne, at the northern entrance of the village of Mareuil, along the provincial road 939 (the old national road 139) and Belle that once fed moat. Seat of one of the four baronies of Périgord (with Beynac, Biron and Bourdeilles), the current castle follows an older victim fighting the Hundred Years War. Mareuil was rebuilt in the early fifteenth century by Geoffrey of Mareuil making it a pleasure residence of Gothic style. Burned during the wars of religion, it was abandoned a century and a half later. After several sales, it is acquired in the seventeenth century by Isabelle de Beauville who bequeathed it to his daughter Jeanne-Francoise, wife of Daniel de Talleyrand-Périgord. They and their descendants undertook the restoration of the castle, but lived there only rarely, and forsook the Revolution. In 1883, Mareuil is included in the legacy that made Elijah Roger-Louis de Talleyrand-Perigord, Prince of Chalais, at the Hospital of Chalais which converts it into a farm. In 1963 the castle was bought, restored, refurbished and inhabited again by the Dukes of Montebello, "princes of Sievers'. It houses a museum devoted to Marshal Lannes and visit by appointment. Castle Mareuil has been classified historical monument list in 1862.

How To Get To Château de Mareuil (Map):