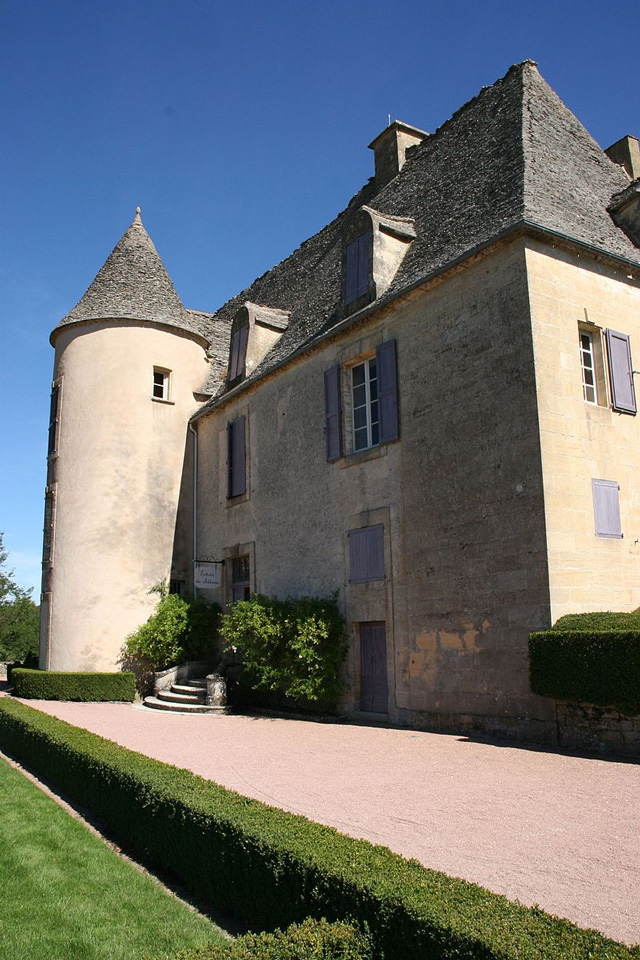 Location: Vézac, in the Dordogne departement of France (Aquitaine Region).
Built: Between 1830 and 1840.
Condition: In good condition.
Ownership / Access: Privately owned.
ISMH Reference Number: PA00083058
Notes: The Château de Marqueyssac is a 17th-century château and gardens located at Vézac, in the Dordogne Department of France. The château was built at the end of the 17th century by Bertrand Vernet de Marqueyssac, Counselor to Louis XIV, on cliffs overlooking the Dordogne Valley. The original garden à la française was attributed to a pupil of André Le Nôtre, and featured terraces, alleys, and a kitchen garden surrounding the chateau. Between 1830 and 1840, Julien Bessières constructed a chapel and a grand alley one hundred meters long for horseback rides. In the 1860s, the new owner, Julien de Cervel, began to plant thousands of boxwood trees - today there are over 150,000 - and had them carved in fantastic shapes, many in groups of rounded shapes like flocks of sheep. He also added linden trees, cypress trees, and stone pine from Italy, and introduced the cyclamen from Naples.[1] Following the romantic style, he built rustic structures, redesigned the parterres, and laid out five kilometers of walks. In the second half 20th century the house was rarely occupied and the gardens were not well maintained. Beginning in 1996, a new owner, Kleber Rossillon, restored the gardens to their old character and added some new features including an alley of santolina and rosemary and, in the romantic spirit of the 19th century, a course of water descending from the belvedere and ending in a cascade. The gardens were opened to the public in 1996. Since 1997, the gardens have been classified amongst the Notable Gardens of France by the Committee of Parks and Gardens of the French Ministry of Culture.

How To Get To Château de Marqueyssac (Map):