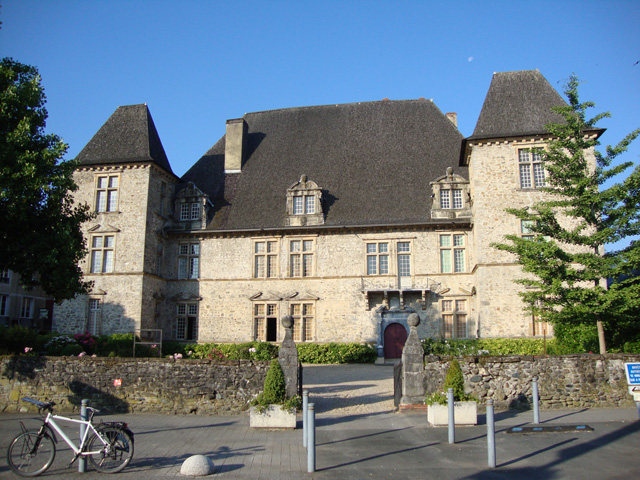 Location: Mauléon-Licharre, in the Pyrénées-Atlantiques departement of France (Aquitaine Region).
Built: 16th century.
Condition: In good condition.
Ownership / Access: Azémar Fabrègues family. Open to visitors during the months of July to September.
ISMH Reference Number: PA00084443
Notes: Château de Maÿtie or Andurain Castle is a castle located in Mauleon-Licharre, in the Pyrénées-Atlantiques and the Aquitaine region. The castle is the subject of a classification as a historical monument, constructed in several étapes1: the entire castle is recorded May 19, 1925; facades, roofs and carved interior fireplaces are classified 2 October 1953; the south wing of the castle, is included in its entirety on 24 November 2005. The castle was built by Arnaud de Maytie, appointed bishop of Oloron by Henry IV in 1598 with the mission to restore the Catholic church in a diocese with Protestant majority . In 1661, the revolt of Matalas priest led to the destruction of one of the four towers of the castle, which was never rebuilt. The castle, never sold, is kept in the same family since its construction. Maytie is the property of the family of Azémar Fabrègues. The castle can be visited during the months from July to September.

How To Get To Château de Maÿtie (Map):