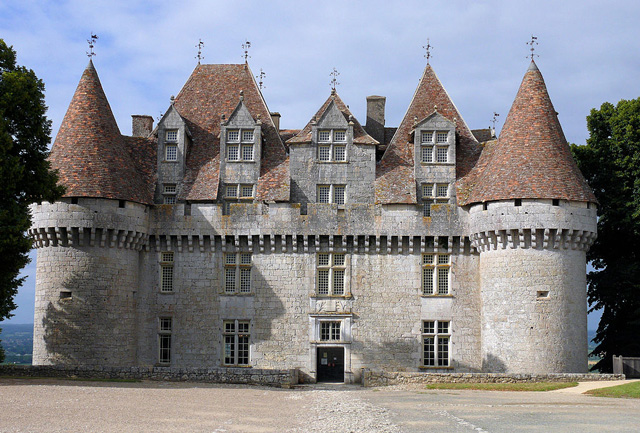 Location: Monbazillac, in the Dordogne departement of France (Aquitaine Region).
Built: 15th century.
Condition: In good condition.
Ownership / Access: Privately owned.
ISMH Reference Number: PA00082651
Notes: Château de Monbazillac is located in the town of Monbazillac, in the French department of Dordogne. It is a historical monument by decree of 20 February 1941. It is surrounded by a renowned vineyard, at the edge of a plateau overlooking the Dordogne, opposite Bergerac. Around 1550, the castle was built in one go by Charles d'Aydie on a very simple plan: a rectangle confined to four corners of big circular towers. Access is by a fixed bridge with two arches. Defenses are planned: battlements, loopholes, battlements and ramparts. One well is in one room. Huguenot Louis Bouchard of the Aubeterre buys in 1607 the castle, which in 1666 became the property of Pierre Barraud. In 1685 signed the Edict of Fontainebleau, the Edict of Nantes was revoked. The widow of Pierre Barraud abjured Protestantism to become Catholic. In 1777, François Hilaire Bacalan (1728-1804) bought the castle. In 1790, he became mayor of Monbazillac and abandons its particle. The castle through the French Revolution without damage. In 1960 the castle was bought by the cooperative Cave de Monbazillac which markets the wine its 25 hectares of vineyards that surround the castle. The castle is a museum with the help of Jean Secret (1904 to 1981).

How To Get To Château de Monbazillac (Map):