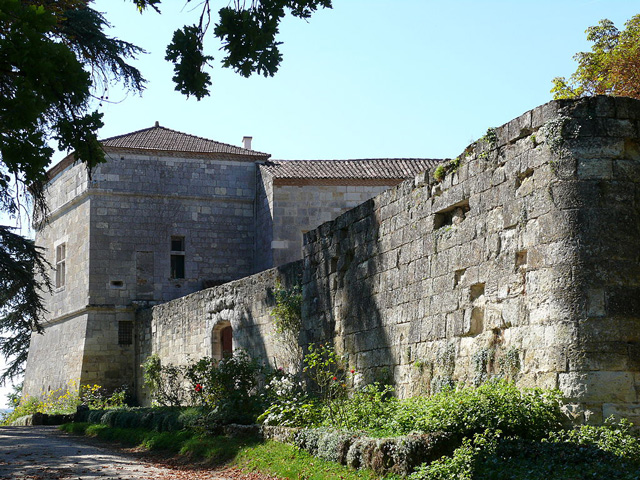 Location: Estillac, in the Lot-et-Garonne departement of France (Aquitaine Region).
Built: 13th century.
Condition: In good condition.
Ownership / Access: Privately owned.
ISMH Reference Number: PA00084113
Notes: Château de Montluc, or Monluc, named after its most famous owner, Blaise Monluc, is located in the town of Estillac, in the French department of Lot-et-Garonne.The castle whose oldest parts dating from the thirteenth century belonged to Monluc Blaise and his siblings inherited his uncles in 1544 and has gradually acquired their shares. Its wars in Italy he reported bastion construction. He began, probably in 1570 (Monluc a letter dated 1567 states that brought wood to build his castle, but had to start work after the death of his first wife), modify the castle to turn it defense during the unrest of the religious wars. It increased the castle defenses by adding bastions protecting the entrance. He planned to build a chapel in the bastion is to be buried there and he built a monument located outside the castle. The castle has a very closed trapezoidal plan giving the courtyard a nearly triangular plan. The work included the old buildings. The wings and south bastions and resume a plan that was introduced by the Italian military engineers and which we can see the first practical implementation in France in Navarrenx that Fabricio Siciliano fortified for Henri d'Albret. The defenses of the entry as the upper parts of the bastion had to be demolished in 1793. Blaise Monluc retired there in 1575 to write his comments but he died in 1577 in Condom which his son was bishop and was buried in the cathedral. His family kept the castle until 1753 when it was sold to René-Louis Montadouin. He himself gave the castle to François-Louis de Brondeau of Urtières in 1787. Since the castle has remained by women in the same family. The castle was classified as historical monuments March 5, 1958.