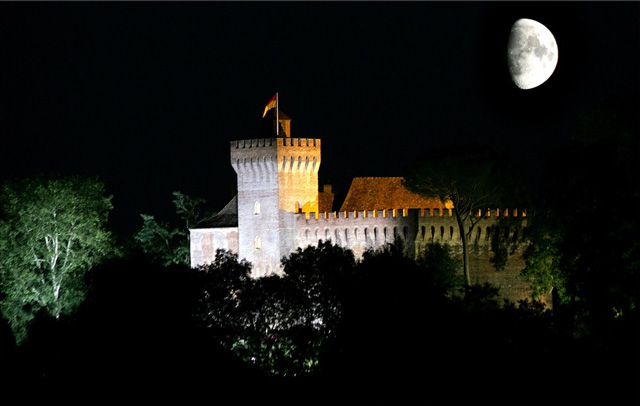 Location: Morlanne, in the Pyrénées-Atlantiques departement of France (Aquitaine Region).
Built: 14th century.
Condition: Restored.
Ownership / Access: Property of the department.
ISMH Reference Number: PA00084455
Notes: The Château de Morlanne is a restored castle in the commune of Morlanne in the Pyrénées-Atlantiques département of France. This imposing brick fortress, forming a polygonal enceinte, is a powerful 14th century structure with gateways, a courtyard, moats and a high keep. Inside is a manor house dating from the end of the 16th century.The castle, standing on a motte at the southern end of the village, was built about 1370 by the architect Sicard de Lordat for Arnaud-Guilhem, the brother of Gaston Fébus (Gaston III of Foix-Béarn), in order to supervise English Gascony. There had been an earlier building on the same site of which there is no description. In the second half of the 15th century, Odet d' Aydie (1425–1498), right-hand man of Charles VII and later of Louis XI, become lord of Morlanne and transformed the austere castle with more chimneys and windows. Further alterations between the 16th century and the 19th century transformed the building over time into pleasurable residence. In 1866, the castle became the property of Albert de Domec, a member of one of the oldest families in Morlanne which had owned the lay abbey for centuries. Various families owned the castle until World War II, when the castle became uninhabited and succumbed to ruin. In 1969, the historian Raymond Ritter (1894–1974) acquired the castle and decided to restore the building as a medieval fortress. Works included restoring the defences of the surrounding wall towards the west starting from the keep, filling in windows added in the 18th and 19th centuries in the part of the enclosing wall next to the keep, rebuilding of the upper half of the keep and some of the buildings that had disappeared from the south-west of the courtyard. In 1975, M. and Mme. Ritter left the castle as well as its collection of works of art and furniture to the département of Pyrénées-Atlantiques.