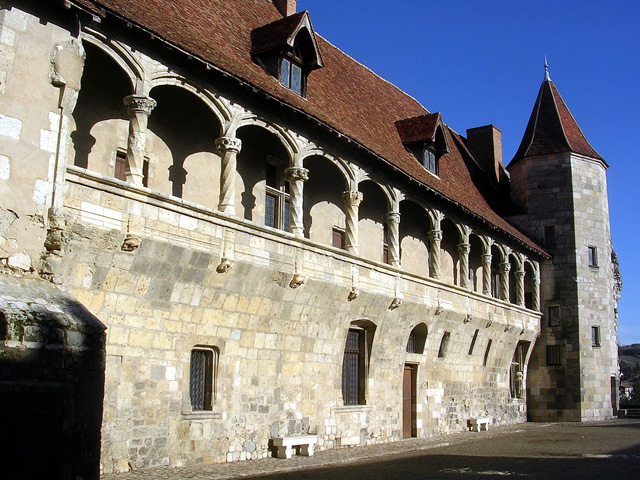 Location: Nerac, in the Lot-et-Garonne departement of France (Aquitaine Region).
Built: 14th century.
Condition: Dismantled in French revolution.
Ownership / Access: Now a museum.
ISMH Reference Number: PA00084192
Notes: The Château de Nérac is a castle in the Lot-et-Garonne département in southwest France. An edifice of the French Renaissance style, it was finished during the reign of Jeanne d'Albret, the daughter of Marguerite d'Angoulème who was also Marguerite de Navarre by her marriage, (the sister of the king, Francis I of France).An earlier residency from the actual castle belong to Arsieu of Albian in 1088 and later to Amanieu VI of Albret (Labrit), the castle was rebuilt between the 15th and 16th centuries by the House of Albret. The House of Albret became linked to the Kingdom of Navarre after his marriage to Queen Catherine of Navarre (Lescar, 1486) and his crowning as King Jean III of Navarre. The castle was the location of a vibrant court during the life of Jeanne d'Albret, Queen Jeanne III of Navarre, and the youth of Henry III of Navarre, the future Henry IV of France. In 1560, Queen Jeanne III and her court converted to reformed religion after the meeting of Theodore de Bèze, and they welcomed a number of artists, such as Clément Marot. After the coronation of Henry III of Navarre as King Henry IV of France, the castle was deserted. It was partially destroyed in 1651 by Henry of Lorraine, Duke of Mayenne, after the town revolted against king Louis XIII of France and then dismantled during the French Revolution, excepting the northern part, which is now a museum.